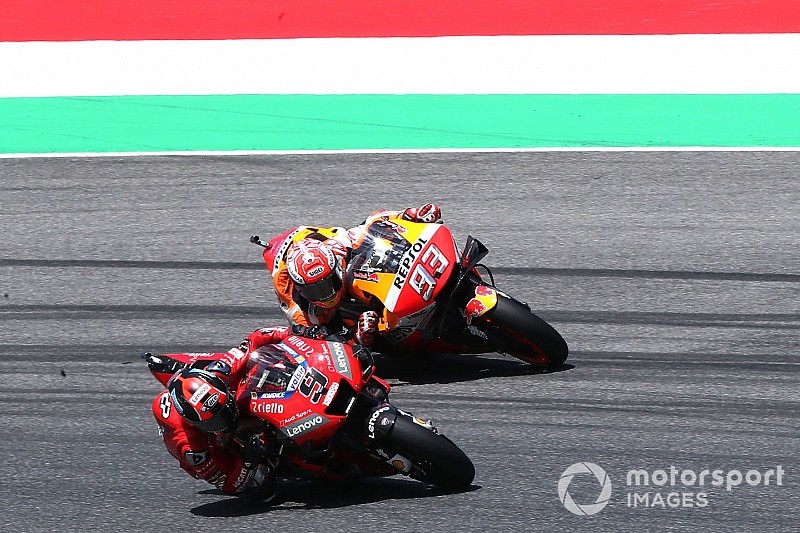 Marc Marquez says that he did not try to pass Danilo Petrucci on the last lap of MotoGP's Italian Grand Prix as he did not want to risk title rival Andrea Dovizioso passing them both.

Marquez was fighting with factory Ducati pair Petrucci and Dovizioso, as well as Alex Rins, who was ultimately unable to bother the trio from fourth, for the victory at Mugello.

Petrucci led the majority of the latter stages of the race with Dovizioso running behind him, but Marquez slipstreamed past both of them on the main straight ahead of the final lap.

But the Honda rider ran slightly wide with Dovizioso on the inside of him, and Petrucci snuck past the both of them to retake the lead.

Marquez, leaving Turn 1 second, said that his focus for the rest of the lap was to keep Dovizioso behind, and not gift him a win with a desperate move on Petrucci.

"I try in the beginning like always, try to do my pace but I already have two small moments, I say today is not the day [to pull away], I will follow and I will fight on the last lap," said Marquez, whose lead over Dovizioso in the championship grew to 12 points.

"Just I miss the apex on Turn 1, but then when I saw the last lap that Danilo was first, me second and Dovi third, I say okay, I will not try, I will just defend.

"If I try and both we go wide, Dovi wins the race and then is worse for the championship.

"For that reason just I stay behind Danilo, I try on the last [corner] with the slipstream but we knew that was very difficult."

He added that he spent the previous laps "studying" how best to pull off a move on the Ducatis.

"For me was great to overtake both Ducatis on the straight, the other laps I was studying to see if it was better on the right side or left side but then I saw the right side was too dirty and then the bike started shaking," he explained.

"I went to the left side but with two slipstreams I arrived in the braking point with very high speed, when I miss the apex.

"I already see that I was going wide but then I just try to be tight in, then I saw some red bike inside, I don't know who it was, Dovi or Danilo, but just I was going in and then I see that he picks up.

"When going off the first corner and I see that I am second and first was Petrucci, was like okay, we are in a good situation."

Petrucci "so sorry" to hamper Dovizioso in race-winning move