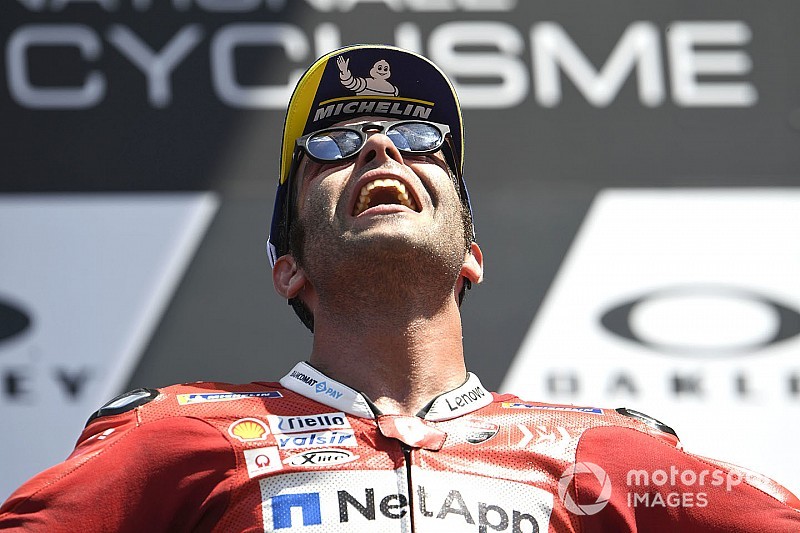 Ducati rider Danilo Petrucci secured his first-ever MotoGP victory on home soil at Mugello after edging out Marc Marquez at the conclusion of a thrilling Italian Grand Prix.

Petrucci held on in a tense showdown, beating Honda rider Marquez by only 0.043 seconds on the drag to the finish line, with Andrea Dovizioso making it two Ducatis on the podium in third.

The 28-year-old, who won on his 124th start in the premier class, is out of contract at Ducati at the end of the season, but his triumph will have significantly bolstered his hopes of a renewal.

Petrucci led much of the second half of the race after he hit the front of the field at the start of the 11th lap of 23, as a pack of five riders broke clear of the rest following a chaotic first half.

Dovizioso, Marquez, Rins and Jack Miller all followed in Petrucci's wake, but Miller - Petrucci's only real rival in the race for a 2020 factory Ducati seat - crashed out of fifth on lap 16.

Petrucci briefly ceded the lead to teammate Dovizioso at San Donato at the start of lap 20, but the less experienced Ducati rider was able to wrest back the advantage later that lap at Scarperia.

Dovizioso drafted back ahead to lead heading into the final lap, but found himself squeezed by Marquez - who benefitted from a double tow - on the outside of San Donato and Petrucci on the inside.

That allowed Petrucci to retake the lead, with Marquez now second ahead of Dovizioso, and Marquez was unable to get close enough to attempt a pass.

The reigning champion only fell 0.043s short of passing Petrucci exiting Bucine for the last time, with Dovizioso and Rins both finishing within 0.535s of the winner.

Exactly six seconds adrift of Petrucci was Nakagami, who passed LCR teammate Cal Crutchlow for sixth - which became fifth after Miller crashed ahead of him, giving the Japanese rider his best-ever MotoGP finish.

Vinales, who had a trademark early slump down the order, also picked off Crutchlow with five laps to go to salvage sixth on an otherwise disastrous day for Yamaha.

Fabio Quartararo made a poor start from second on the grid, ending the opening lap eighth, and from there the Petronas SRT rider was unable to mount a comeback.

He found himself passed by Ducati wildcard Michele Pirro, a fading Crutchlow and KTM rider Pol Espargaro in the closing laps on his way to a lowly 10th place.

Valentino Rossi suffered an even worse race on the factory Yamaha. The Italian was running 15th when he got tangled up with Joan Mir's Suzuki, both riders running across the gravel, and was already down to 21st and last when he crashed at Arrabbiata 2 on lap eight.

Mir recovered from the altercation with Rossi to finish 12th, a place behind Aleix Espargaro's Aprilia, while Jorge Lorenzo endured another torrid race for Honda, finishing 13th.

Francesco Bagnaia made it a double DNF for Pramac after crashing at Bucine on lap 12, while Hafizh Syahrin (Tech 3 KTM) and Tito Rabat (Avintia) both retired in the pits.

Mugello MotoGP - the race as it happened