Marquez: Manner of Jerez win a statement to MotoGP rivals 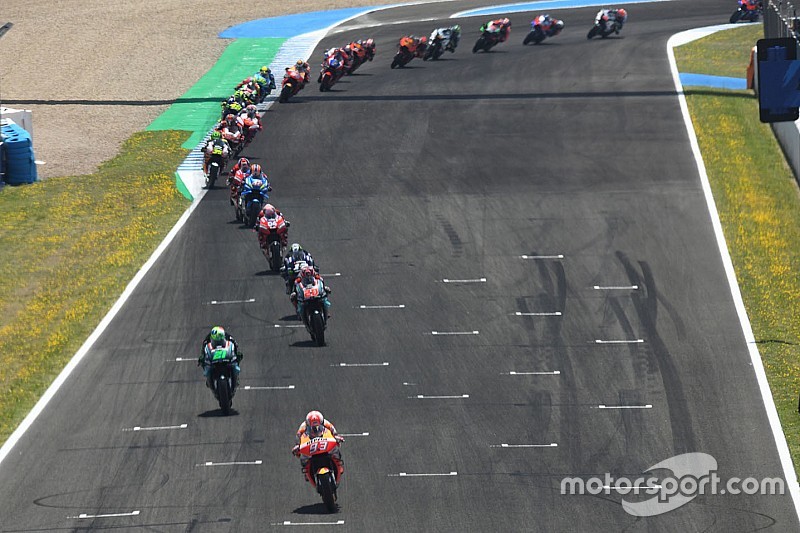 Honda rider Marc Marquez says the dominant manner of his victory in Jerez was a way of showing his rivals that his confidence hadn't been knocked by his Austin crash.

Marquez fell from a comfortable lead at COTA and was consigned to his first-ever defeat at the Grand Prix of the Americas, but bounced back in style in Jerez, taking the lead at the first corner and controlling the 25-lap race.

The reigning champion revealed after the race that he intentionally set out to control the grand prix from the outset in order to prove a point, rather than wait for the race to come to him given his superior used-tyre pace.

“Happy to win this race, and especially happy to do it in this way, because this was the target,” Marquez said.

“[It] was the intention, because after Austin mistake I say I would like to arrive in Jerez and try to win on the same way, and we did it.

“After the Austin crash I saw many people [say] 'oh, his weak point, ah, he crash, blah blah', but I just don't care, I had the confidence and I know what happened in Austin, we understand, this was a big help.

“And my way today was just go out and try to be from the beginning until the end in the front, because then you show to the people, to the opponents, that I'm the same Marc, same confidence, and [that] this year I feel good.”

Despite taking the lead into the first corner, Marquez was unable to make a break for it right away, and had to contend with the Petronas Yamaha bikes of Franco Morbidelli and Fabio Quartararo in the opening stretch of the race.

“Was patient, this race, in the first laps I didn't feel that feeling, so we wait, I was going wide a little bit the corners, maybe with the full tank, maybe with the track conditions.

“But when the tyres start to drop and I start to slide more the bike and the fuel tank was less [full], then I start to feel like in the practice, I start to attack but under control.

“I saw that Fabio was coming, then [Alex] Rins, and yeah, lap 15 I just attack one [more] time, because then you show to the opponents [that you can go faster].”

Quartararo 'can only be happy' with Jerez weekend