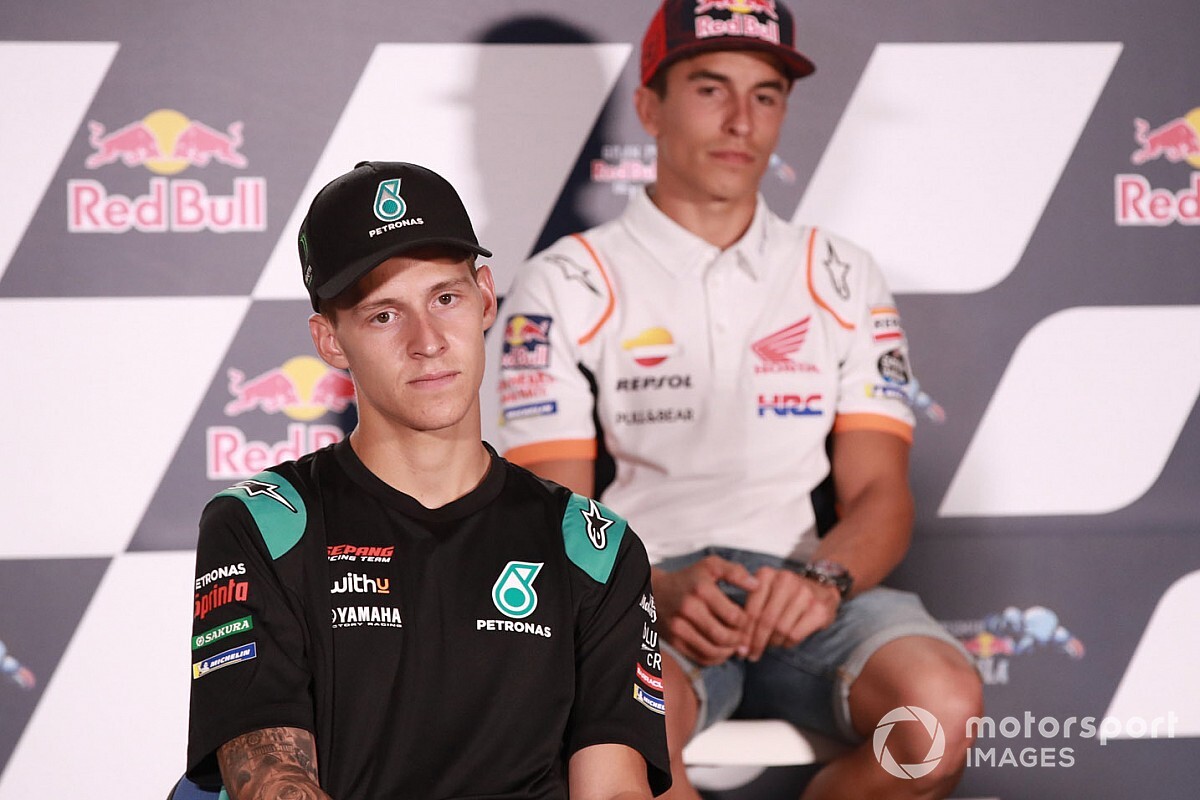 Marquez has been out since an aborted comeback attempt from a broken right arm suffered in a crash in the Spanish Grand Prix, and looks set to be sidelined until at least the end of October.

Petronas Yamaha’s Quartararo won the Spanish GP at Jerez and the following Andalusian GP at the same venue to take the lead in the championship, but scored just 20 points between the Czech and San Marino races.

This lost him the championship lead to Ducati’s Andrea Dovizioso, with Quartararo now one point behind the Italian after a penalty in the Emilia Romagna GP dropped him to fourth from third.

Dovizioso won the Austrian GP, but has largely struggled for form as he has found adapting to Michelin’s new rear tyre construction difficult.

Having pegged both Dovizioso and Quartararo as his favourites to take the 2020 title, Marquez in an interview published by Honda says he expected more from both.

“It is true that in Austria I said Quartararo or Dovizioso were the favourites [to fight for the title],” Marquez said. “But, honestly, I expected more from them.

“I especially expected much more from Quartararo, because he won the first two races riding at a great level, and now I don't know what is happening to him.

“It is costing him a lot, even in one of his strengths: qualifying.

“Dovizioso is consistent, but he needs more speed if he wants to win the title because we see that [Maverick] Vinales is there, just like [Joan] Mir.

“We have eight or nine riders [covered by] 25 points, so it will be interesting to see what happens until the end of the season.”

But consistency has been largely absent from the field and no clear title favourite has emerged, with Marquez admitting the situation is “difficult to understand”.

“It seems that nobody wants to win this world championship; no one wants to lead it,” he added.

“It is difficult to understand the situation, but if you are a rider you surely understand it a little better.”

Marquez has begun training again following a second surgery on his arm to replace the damaged titanium plate and says he is beginning to take “great steps forward” – but doesn’t know when he will get back on his bike.

“When a rider hears the doctors say that he will be out for three months, it is a shock,” he said.

“Now, after a first period in which everything was very slow and in which I did not notice improvements, I begin to feel that I am taking great steps forward.

“At what point am I? I know I am closer to getting back on the bike, but I don't know if it will be in a month, in two weeks or in two months. The body will tell.”