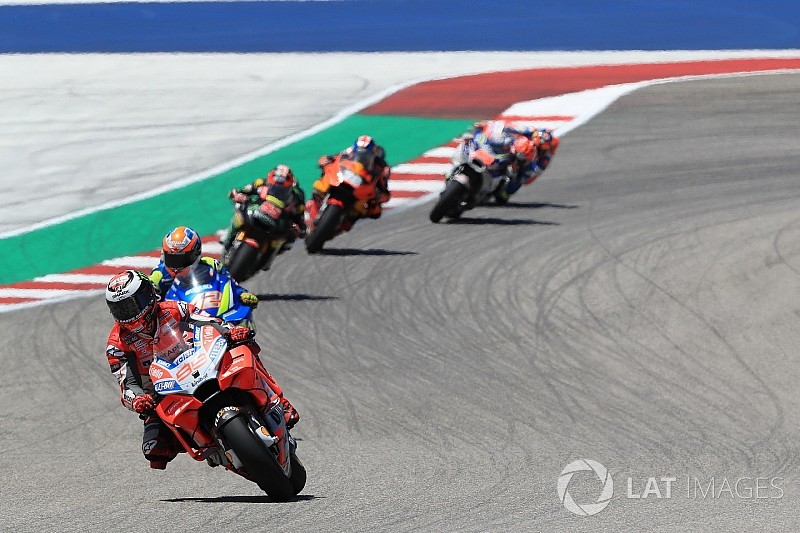 Ducati rider Jorge Lorenzo says his torrid showing in the MotoGP race in Austin made him feel “very sad” and was “difficult to accept”.

Lorenzo was the top Ducati on the COTA grid in sixth, but struggled massively in race trim, finishing 31 seconds behind race winner Marc Marquez in 11th.

This meant the three-time champion is left with only six points from the first three races, continuing his worst-ever start to a MotoGP campaign.

“I'm very disappointed,” Lorenzo said after the race. “I'm very sad. Today is not a good day for me.

“Difficult to accept this result, but there is no other way than [to] forget this race, think positive, keep working very hard, as I'm working now.

“The results for the moment are not coming, I just hope that the things change and I can demonstrate my riding.”

The Spaniard said he struggled throughout the race but “especially in the end” - and explained that “a lot of problems” contributed to his abject performance.

“Firstly at the beginning, the start, difficult to start with the new bike, a little bit more than last year," he recalled.

“Probably we didn't choose the right tyre on the rear - the hard [compound] was spinning so much, moving so much.

“Very physical track, and with the new bike I believe that I struggle more physically, especially in the braking. Have to find some solution for the future.

“I know what I did in the past and what I can do in the future, so just keep moving, keep working and some day we arrive [at] the good satisfaction, no?”

Despite struggling for pace, Lorenzo spent most of the race within the top 10, before being demoted by an aggressive move from Pramac Ducati's Jack Miller down the inside of Turn 1.

“If I don't pick up the bike, I crash,” said Lorenzo when asked about Miller's move.

“If the other rider doesn't contact, impact you, or you don't crash, they [the stewards] don't do nothing. But always the same riders, these actions."

Miller, who ended the race in ninth, admitted that the move was “a little bit late”.

He continued: “I tried to apologise after the race, say sorry, but he wasn't having any of it. I mean, I came in and he was running a really strange line into there, tipping really late into the corner.

“He was so wide already, I thought 'ah, I'll give it a go, try and slide up the inside' - and I did, and I didn't feel any contact, I don't think there was contact.

“But it was a late move. But at that point I felt his pace was dropping and I found my opportunity to go through and I had to take it, I guess.”