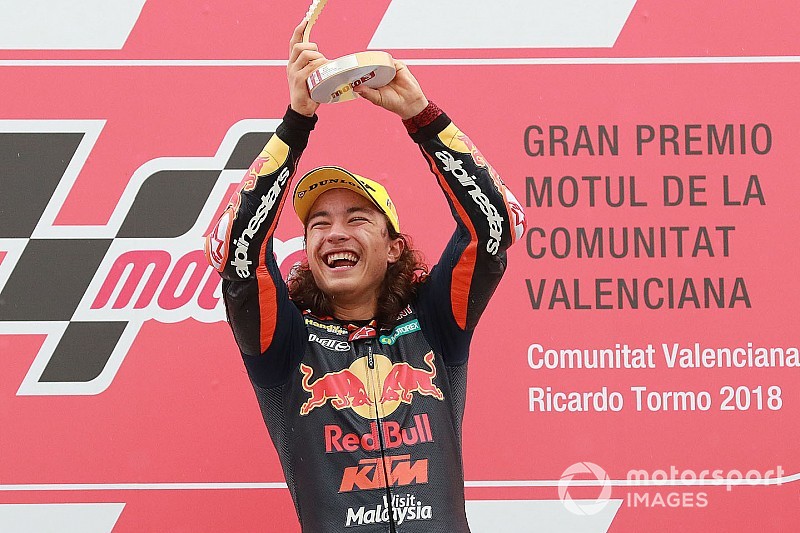 Fifteen-year-old Can Oncu took a sensational win on his Moto3 debut at a wet Ricardo Tormo circuit following crashes by Tony Arbolino and Marco Bezzecchi.

Reigning Red Bull Rookies champion Oncu lined up fourth for his first Moto3 wildcard appearance and gained a position at the start, running behind pole-sitter Arbolino and the fast-starting Bezzecchi.

The early stages of the race saw several riders crash, including Tatsuki Suzuki collecting Aron Canet and Lorenzo Dalla Porta on the opening lap, and Bezzecchi soon hit the deck as well.

Arbolino subsequently built a safe gap over Oncu, who also pulled away from John McPhee, the Briton soon falling behind the charging Gresini duo of Fabio Di Giannantonio and Jorge Martin.

However drama ensued when Arbolino's comfortable run to his maiden win ended with a crash on lap 11 at Turn 4, giving Oncu a lead of over six seconds.

Oncu, who will make his full-time series debut next year with the Ajo KTM squad, even managed to further extend his lead although his gap was halved after a near-crash scare on the last lap at Turn 6 and he ultimately won by 4.0s.

Di Giannantonio started to struggle and fell behind Martin and McPhee, the duo completing the podium.

Jakub Kornfeil held sixth in the first half of the race but couldn't keep up with the top five and by the time Enea Bastianini found his way past the Czech rider, he was over 10 seconds adrift.

Bastianini eventually took fifth thanks to Arbolino's crash, followed by Jaume Masia, who became the top rookie of 2018.

Niccolo Antonelli finished seventh, with Nakarin Atiratphuvapat settling for eighth from second on the grid but still securing his best finish of his Moto3 career.

The top 10 was completed by Marcos Ramirez and Celestino Vietti.

Bezzecchi recovered to the point-scoring positions from his early crash only to fall again, but still took the chequered flag alongside Kornfeil, Darryn Binder and Dalla Porta, all of whom were able to continue after crashes.