Honda annihilated the competition to claim a record-extending 28th victory in the 43rd running of Suzuka 8 Hours, as defending champion Kawasaki finished a distant second.

Takumi Takahashi, Tetsuta Nagashima and Iker Lecuona were virtually unchallenged for majority of the race aboard the #33 HRC Fireblade, with a combination of Honda’s pace advantage and a fortuitous safety car helping the trio finish a lap clear of Jonathan Rea, Leon Haslam and Alex Lowes aboard the factory Kawasaki.

It marked the fourth-career win for Takahashi following his previous three successes with Honda in 2010, ‘13 and ‘14, and the first for his rookie teammates Nagashima and Lecuona, who both showed rapid pace throughout the race.

For Honda it marked the end of a dry spell at Suzuka 8 Hours dating back to 2014, when Takahashi, Haslam and Michael van der Mark clinched the top spot for the HARC-Pro squad. 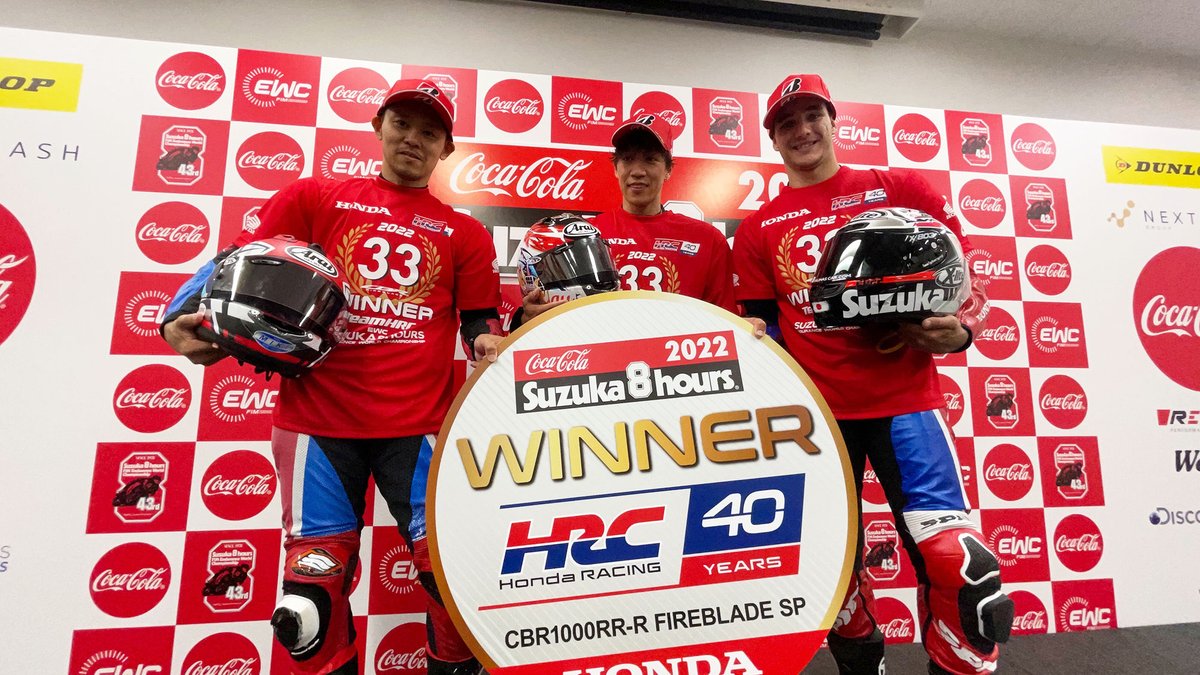 At the start of the race, pole-sitter Takahashi slipped behind both Haslam (now at Kawasaki) and a fast-charging FCC TSR Honda of Josh Hook, but had little trouble repassing them as the inherent pace advantage of the CBR1000RR-R became quickly evident.

An early safety car for a collision between Honda satellite riders Kosuke Sakumoto and Naomichi Uramoto brought Takahashi's rivals back into play as he again dropped down to third, but it took a matter of a laps for the Japanese rider to repass Haslam and the Yoshimura Suzuki of Gregg Black and reinstate the status quo.

From there Takahashi went on to build an eight-second advantage over the chasing pack, with Nagashima further stretching the gap to 22 seconds during his first stint.

Honda’s bid for a first victory in Suzuka in nearly a decade was further strengthened when Lecuona took over the bike in the third hour, just when Kawasaki handed the riding duties to Lowes after previous stints from Haslam and Rea.

Belying his lack of experience at the Japanese track and in endurance racing, Lecuona was rapid out of the gates and set a series of quick laps, while Lowes struggled for pace aboard the factory Kawasaki and dropped 30s to the leader.

This went on to have a major impact on the final order as, when the safety car returned on track after the #51 I.W NAC Yamaha caught fire at second Degner, Lowes ended up picking up the second of the two safety cars.

This handed Lecuona an extended advantage of a 1m15s over the British rider, effectively ending any chances of a miracle fightback from Kawasaki.

Rea did try to close the gap to the leading Honda after taking over the bike again in the fourth hour and was able to consistently match - and at times even beat - the laptimes of Takahashi. But his hard work was undone when he clipped the handlebar of a rival while navigating traffic, forcing him to the ground at the first chicane.

The six-time World Superbike champion was able to hop back on his Kawasaki and get going again, but the 30 seconds he lost in the process put Honda even further ahead of the field.

During the fifth hour of the race, Nagashima was able to put a lap over the Kawasaki during his second stint aboard the works Honda, and from there on the HRC crew enjoyed an untroubled run en route to a remarkable victory on its home turf.

Kawasaki, meanwhile, was forced to turn its attention to securing second place, having dropped behind the YART Yamaha team after losing further time in the pits during Rea’s scheduled stop to complete some repairs on the #10 ZX-10RR.

The #7 YART crew of Marvin Fritz, Niccolo Canepa and Karel Hanika had built a lead of close to 10 seconds over the Kawasaki trio, having successfully rebounded from a woeful start that left the FIM EWC team in 22nd place at the end of lap 1.

The battle between the two squads was set to go down the wire, with YART likely requiring an extra fuel stop at the end of the race to make it to the end.

But a maiden podium for the Austrian team went begging when Fritz and the #74 Yamaha of Riku Sugawara crashed at the Esses on the start of the final hour, wrecking both their races and allowing Kawasaki to seal second position.

Fritz was able to bring the bike back to the YART garage for quick repairs as the safety car returned for a third time, but a stop-go penalty further dampened its chances and it eventually finished the race a disappointing seventh, five laps down the leader.

Late drama for YART promoted its rival EWC team Yoshimura Suzuki to the final spot on the podium on what is expected to be the final outing for the manufacturer as a works entrant at Suzuka.

Competing without Sylvain Guintoli following a hand injury for the French rider and having to start 22nd place, the works Suzuki team appeared rapid during the race with a heroic first stint from Black briefly elevating it to the lead after the first safety car phase.

Black and Kazuki Watanabe ended up dropping a few places down the order as they competed the race as a duo in hot conditions, but a strong end to the race ensured they finished third on the podium.

The #40 S-Pulse team backed up the results of the factory Suzuki squad with a fourth-place finish, as Hideyuki Ogata, Atsumi Cocoro and Takuya Tsuda came out on top in a duel with the #104 Toho Honda of four-time Suzuka winner Ryuichi Kiyonari, Hiromichi Kunikawa and Takuma Kunimine.

Behind the YART Yamaha, the top 10 was completed by the #40 Team ATJ Honda of Yuki Takahashi, Kazuki Ito and Tomoyoshi Koyama, the #5 FCC TSR Honda of Josh Hook and Mike di Meglio, and the #50 Team Kodama Yamaha of Yuuta Kodama, Kengo Nagao and Kenji Nagao.

The FCC TSR team, competing without Gino Rea following his horrific crash in Saturday practice, was in contention for a top five finish until a lengthy pitstop with brake issues in the third hour dropped it down the order.

BMW’s first works entry at Suzuka ended in a DNF after its sole M1000RR crawled to a halt just before the midway point of the race, with two-time IDM champion Ilya Mikhalchik having to push the bike to the pits where it was eventually retired.