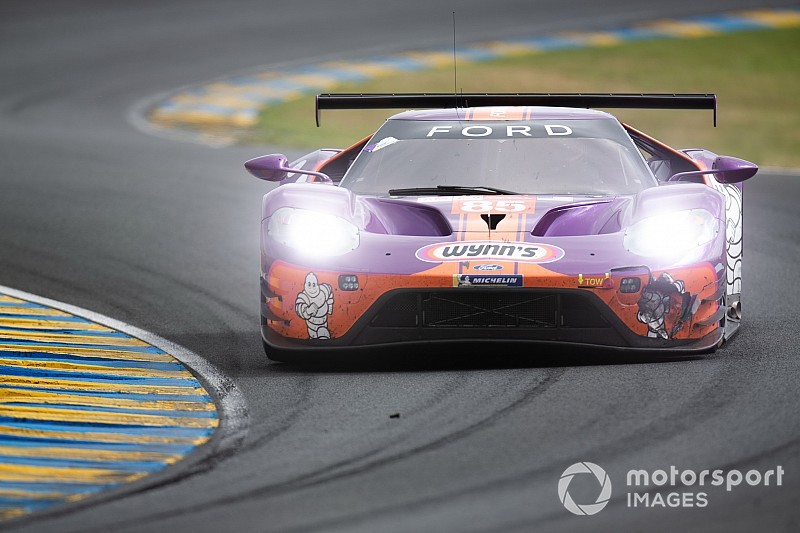 The Keating Motorsports squad that took GTE Am victory with a privateer Ford GT in the Le Mans 24 Hours has been disqualified.

In two separate stewards' decisions, the Keating Ford was initially handed a time penalty just large enough to drop it down to second in class, behind the #56 Project 1 Porsche 911 RSR that inherits class victory.

The first bulletin said that the Wynn’s-liveried #85 Ford GT, in which owner-driver Ben Keating, Jeroen Bleekemolen and Felipe Fraga shared driving duties, "did not meet the minimum complete fuelling time", with a 55.2s penalty being imposed.

Bleekemolen had crossed the line 44 seconds ahead of the Project 1 car of Jorg Bergmeister, Egidio Perfetti and Patrick Lindsey, who had claimed the class FIA World Endurance Championship by finishing second.

This was followed by confirmation that the #85 Ford had been disqualified entirely for a "total onboard fuel volume in excess of the permitted limit".

Ford's top finisher in the GTE Pro class, the #68 machine of Sebastien Bourdais, Joey Hand and Dirk Muller, was stripped of its fourth-place finish for the same reason.

The second stewards' report stated that the fuel capacity of the #85 Ford had been found to be 96.1 litres, 0.1l more than the maximum 96l that had been laid down by the GTE Am class Balance of Performance.

It went on to say that “the competitor explained that the team checked the Maximum Onboard Fuel Volume before the car was shipped from the USA and that they then rechecked the volume after the change in BoP, however this was done using the weight and density of the fuel rather than by measuring the volume directly."

The earlier 55.2s penalty related to the fact the Keating Ford did not have the correct size fuel restrictor diameter to ensure a refuelling time of 45s, as stated by the GTE Am rules.

Its refuelling time was found to be 44.4s, with the 0.6s discrepancy multiplied by the car's number of stops in the race - 23 - and multiplied by four to give the 55.2s figure.

Moving up to second and third places in GTE Am as a result are the Ferrari 488 GTEs of JMW Motorsport and WeatherTech Racing.