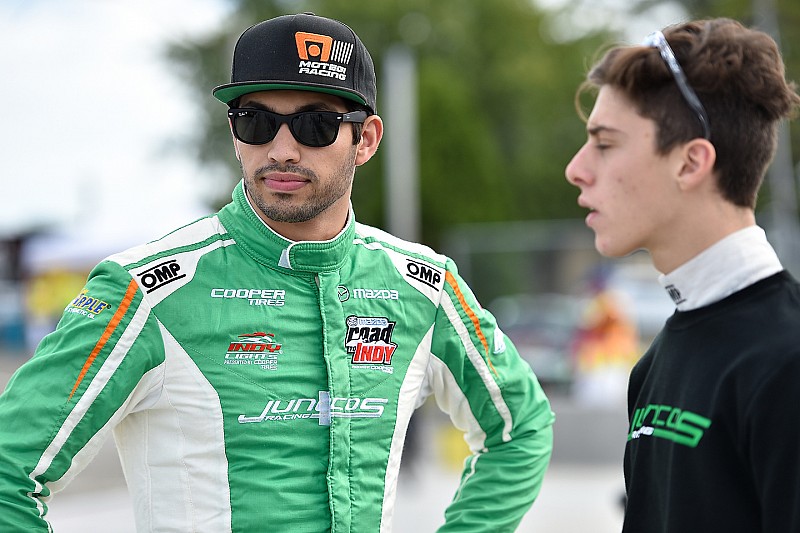 Juncos Racing will field its Indy Lights champion Kyle Kaiser in IndyCar on a part-time schedule in 2018, the team has announced.

California native Kaiser won the Lights title this season in what was his third year in the category, receiving a $1million scholarship from Mazda to assemble a partial IndyCar programme.

The 21-year-old has now been confirmed for a four-race programme with Ricardo Juncos' outfit. It will span the category's two Indianapolis races – the road course event and the Indy 500 – and two other, yet-to-be-confirmed events.

"I'm very excited to be moving up to the Verizon IndyCar Series with Juncos Racing," Kaiser said.

"Juncos has been a huge part of my recent success in the Mazda Road to Indy. I have the utmost confidence in Ricardo's program moving forward and I'm very thankful to everyone involved for making this possible."

The move represents further progress for Juncos' ongoing expansion into IndyCar, after the team made its series debut in the Indy 500 last year.

Speaking about Kaiser's announcement, Juncos said: "This is what our mission is at Juncos Racing, to take drivers to the next level in their career.

"We began with Kyle in the Pro Mazda series back in 2014 and then took him to the Indy Lights series, where he had three years to grow into the driver he is today.

"Each season, Kyle showed tremendous progress on and off track. That hard work and dedication paid off this past season with Kyle winning the Indy Lights championship.

"That Kyle has decided to return to the team for his first run in the Verizon IndyCar Series shows his confidence in our organization.

"Kyle and his family have been a part of the Juncos Racing family for a long time and I am thrilled to be a part of this time in his career and look forward to helping him be a successful driver next year in the Verizon IndyCar Series."