Jean-Eric Vergne: "I did what I could after a bad start, which meant I had to fight to get back to where I was. Beating my team-mate?"

Jean-Eric Vergne (Position: 12th): “A difficult race after we saw yesterday, particularly with Daniel, that the car has a good pace, but in the race we struggled and we could not match our usual rivals. 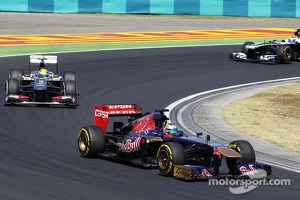 I did what I could after a bad start, which meant I had to fight to get back to where I was. Beating my team-mate? It means nothing, especially when we are outside the points.

I’d rather finish behind him inside the points. The holiday starts soon, but my focus is still on racing and I will be doing a lot of training to be in good shape to have a strong second half of the season. We still have a week to go when, along with the engineers, there will be a lot of work for us to do.”

Daniel Ricciardo (Position: 13th): “Right from the start, it was clear we weren’t really quick. I tried to hold position as long as I could but we were way too slow. I tried my best in terms of trying to maintain a good pace and look after the tyres, but today it was not enough to go looking for points.

We got a bit more out of the car in qualifying yesterday, but it’s hard to repeat that for seventy laps. We struggled at Nurburgring as well, so the heat has got something to do with it. We could not match our competitors today, just lacking speed when we have a heavy fuel load, which is the opposite of what we tended to see with last year’s car.”

Franz Tost: “A difficult race for us, as it highlighted what appears to be our weak point at the moment, namely racing in hot conditions and with track temperatures exceeding 50 degrees, this was the hottest Grand Prix of the year. The opening stints were tricky on both cars, but towards the end, we picked up a bit more pace which saw us close on the Saubers and Force Indias. Hopefully, when we return to race in cooler conditions, we can once again get back in the points.

However, there will be more hot races, so we must investigate ways of improving our car for these conditions. We have demonstrated again this weekend that the car is fast, as we secured a fifth consecutive top ten grid start, but of course there are no points for that. We still have one week to work before the enforced factory summer shutdown and we will be working flat out to ensure we come back in better shape for Spa.”