The No. 46 Fall-Line car driven by Mark Boden and Bryan Sellers won the Brickyard Challenge. This incredible achievement was the second consecutive success for Fall-Line Motorsports.

Round 7 of the 2013 Continental Tire Sports Car Challenge at the Indianapolis Motor Speedway could have finished very well for the No. 45 Eagle Tech / B+ Foundation / Jetset Magazine Fall-Line BMW co-driven by Al Carter and Hugh Plumb. After a great start from the front row, Hugh Plumb had a magnificent stint leading a total of 31 laps.

He handed the car to Al Carter while leading. Al did a great job and ran as high as 3rd but a late on track incident forced the No. 45 car to pit then after regaining the race, Al had to retire the car and finished 19th. 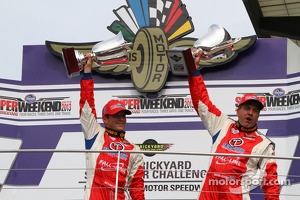 The No. 46 Fall-Line sister car driven by Mark Boden and Bryan Sellers won the Brickyard Challenge. This incredible achievement was the second consecutive success for Fall-Line Motorsports.

Fall-Line Motorsports came to the Indianapolis Motor Speedway with great momentum, following a win for Boden and Sellers at Watkins Glen International Raceway and the first podium finish of the season for B+ racers Al Carter and Hugh Plumb.

Before the racing portion of their Indy week, Carter and Plumb visited the Center for Cancer and Blood Diseases at Peyton Manning Children’s Hospital at St Vincent in Indianapolis. As usual the two B+ Foundation Ambassadors made the kids happy and even came with gifts.

Thanks to Stinkerz.com they distributed trading cards. Blankets were also donated by ProjectLinus.org. Project Linus provides love, a sense of security, warmth and comfort to children who are seriously ill, traumatized, or otherwise in need through the gifts of new, handmade blankets and afghans, lovingly created by volunteer “blanketeers.”.

Carter and Plumb had great ambitions for the Indy race knowing that their team and machine would be competitive based on last year’s result and the good run of the team at Watkins Glen.

The Brickyard Sports Car Challenge event started very well for the two B+ Racing drivers. Their 45 BMW was highly competitive right out of the box. The No. 45 Eagle Tech / B+ Foundation / Jetset Magazine Fall-Line BMW was one of the quickest cars on Thursday and Friday.

Al Carter topped Thursday afternoon free practice and Hugh Plumb qualified second only beaten in the last minute of the qualifying session by less than a tenth of a second by Jade Buford who has already scored 5 pole positions this season.

Plumb started the race with the ambition to take the command of the race quickly and he did. The driver from Unionville, Pennsylvania led a total of 31 laps in the race and certainly raced his best stint since the inception of the B+ Racing program in 2011.

Hugh stopped for the first programmed pit stop and handed the car to teammate Al Carter while leading the race. Al Carter got in with an hour-and-a-half remaining in the race and after all pit stops were complete, he found himself in 3rd place.

At that moment Al was racing hard with the best racers of the Continental Tire Sports Car Challenge then he got into an unfortunate on track collision with another competitor. Following the incident, Carter came into the pits for service. The car was damaged pretty heavily and the Fall-Line Motorsports crew was working on the repairs.

Somehow, a miscommunication occurred and Al left the pits without all four tires installed properly. The right rear came off on the circuit and left him stranded. The No. 45 machine finished 19th in class.

This was also the third round of the 2013 North American Endurance Championship presented by VisitFlorida.com which this year included three races; the Rolex 24 At Daytona, the Six Hours of the Glen and the Brickyard Grand Prix. Al Carter raced in the three events.

Al Carter was credited with an 8th place finish in the 2013 North American Endurance Championship GT class driver standings. The Brickyard Sports Car Challenge race will be televised on SPEED TV Saturday, August 3 at 4:00 PM ET. The next event is round 8 of the 2013 Continental Tire Sports Car Challenge at Road America, Wisconsin on August 8-10.

Promising run at the Brickyard CTSCC ends too soon for Marsal