As a replacement for the postponed real-life season, the series organised a six-lap sprint race on MotoGP 19, with 10 MotoGP riders participating.

Marquez started the race from fourth position but threw himself into a lead battle with Pramac Ducati rider Francesco Bagnaia on the opening lap.

Italian rider Bagnaia ran wide at Turn 1 on the second lap and Marquez assumed the lead.

Bagnaia attempted to catch Marquez but a crash on the penultimate lap ended his victory chances and ensured Marquez won the race by 7.093 seconds.

Polesitter and Petronas SRT rider Fabio Quartararo crashed into Vinales on the opening lap, dropping the duo to the back of the field. Vinales recovered to finish on the podium, while Quartararo had another incident just a couple of laps in.

A crash for reigning six-time MotoGP champion Marc Marquez at the halfway stage dropped him out of the podium places, and he was also passed by Quartararo for fourth place. Marquez took fifth place with just two days of practice on the game.

KTM’s Miguel Oliveira struggled to adapt to the virtual world, finishing eighth but ahead of his 2020 team-mate Iker Lecuona who had multiple crashes.

Aleix Espargaro’s limited time in the virtual world showed; he finished 10th and last of the riders.

MotoGP is set to announce more virtual races in the near future. 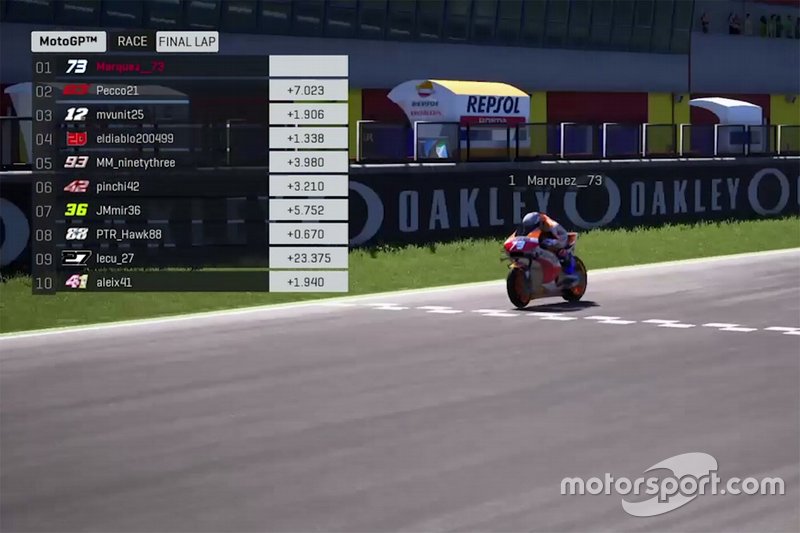 Quartararo: Marquez has "raised the bar" for fitness