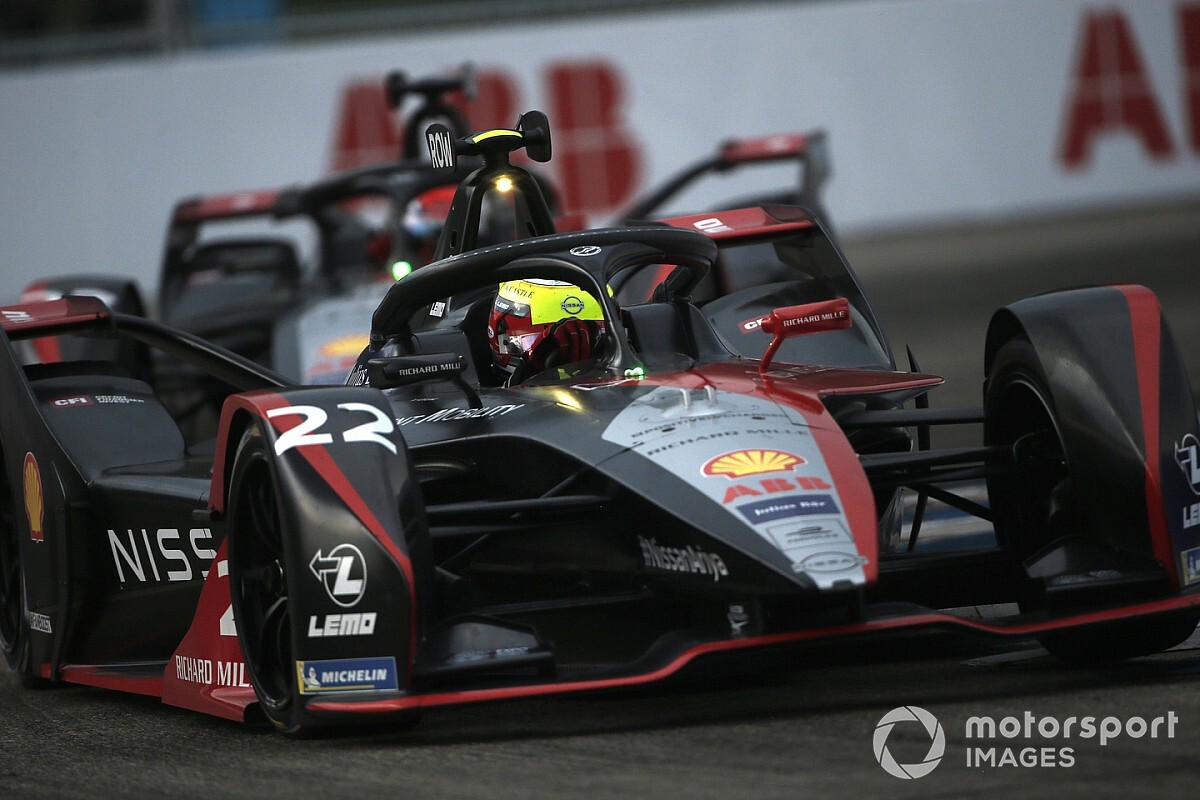 Oliver Rowland landed pole for the fifth Berlin race in a farcical Formula E qualifying in which four top championship drivers failed to set a time.

A superpole run of 1m15.955s secured the Nissan e.dams driver his third pole in the series by 0.049s over the Envision Virgin Racing car of Robin Frijns.

The top-six fight featured three shock contenders following a torrid opening group session for the leading drivers, which allowed Neel Jani to run to an impressive and unexpected third.

The Porsche pilot secured his best ever FE qualifying ahead of what is expected to be his last two races in FE before likely being replaced by former Mahindra runner Pascal Wehrlein.

Double DTM champion Rene Rast was provisionally on pole after his group four flier, but an unremarkable superpole lap means he will line up fourth for Audi ahead of Alex Lynn - standing in for Wehrlein for the final six races.

Tom Bomqvist was a brilliant sixth on his return to the series after coming in to replace James Calado at Jaguar, with the Briton required in the FIA World Endurance Championship for Ferrari and so missing the final double header.

The group one contestants often head out late into the session to set one flying lap without the need for a preparation run, which has seen a late scrabble for track position in previous rounds.

This came to a head with the first use of the extended track, as Maximilian Gunther led a train of Jean-Eric Vergne, Antonio Felix da Costa, Lucas di Grassi and Sebastien Buemi slowly through the first turns as he tried to find space behind Jaguar driver Mitch Evans.

Di Grassi was already running right on the rear of da Costa and then received instruction over team radio that he had to pass, which led to them hitting on the exit of the Turn 15 hairpin.

As they delayed one another, the chequered flag for the first run came out on the 130-metre longer layout before the two DS Techeetahs, di Grassi or Buemi crossed the line.

All failed to set a time, which left a two-car shootout between Gunther and Evans in the battle to finish runner up in the championship - 15 points separate second and sixth place.

Gunther, who won race three at Tempelhof Airport, topped the messy shootout on a 1m16.394s lap to beat out Evans by just 0.001s.

But the group three runs from Lynn and Frijns would leave them out of the superpole shootout, before the unexpected times of Rast, Blomqvist and Jani shuffled Gunther down to 13th and Evans 14th.

Thanks to the maiden superpole appearance for Jani, he knocked Porsche teammate Andre Lotterer down to seventh.

The woes of the championship leaders allowed NIO 333 driver Oliver Turvey into 12th.

Behind Gunther, Evans and the second BMW Andretti of Alexander Sims, a Turn 5 wall tap dropped Sam Bird to 16th ahead of Jerome d’Ambrosio.

Mercedes’ recent strong qualifying pace seemed absent, as Stoffel Vandoorne and Nyck de Vries ran slowest at the time of their group two efforts and were continually demoted to 18th and 19th.

Provisionally, di Grassi will line up 21st ahead of newly crowned champion da Costa, with Buemi and Vergne on the final row. All four are FE title winners.