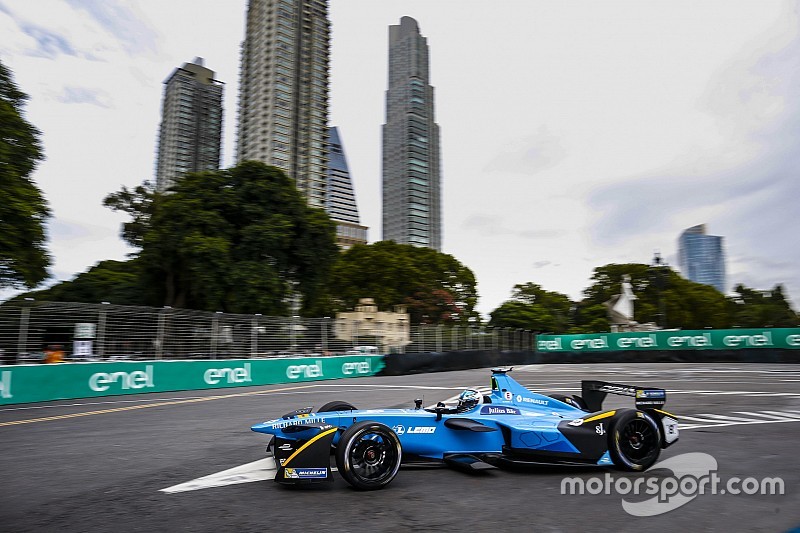 Nicolas Prost put the first miles on aspects of the French squad's 2017/18 powertrain at the Calafat circuit in Spain earlier this month.

The team also expects further test outings ahead of the next round of this year’s championship in Mexico City in April.

“We have started quite early this year with trying some development parts at the track, yes,” said Prost in Buenos Aires last weekend.

“We went to Calafat in Spain for the day and unfortunately it was very wet and very cold but we at least got some initial results from the test.”

Renault e.dams is working on a further evolution of its Renault Z.E. 16 car before it progresses on the season five project, which will see an entirely new package to accommodate the 54Kw battery for 2018.

“We are working on the future all the time and thinking about what we need for the next few seasons,” said Renault technical director Vincent Gaillardot.

“We were on the track last week with some components for season four, and we take the R&D learning to the long-term.

"We expect the opposition from new manufacturers to be very strong, so we can never stop and sleep.”

Jaguar is believed to have been the first Formula E team to track test a season four development car when it gave an outing to Williams F1 driver Felipe Massa earlier this month.

DS Virgin reserve Alex Lynn is also expected to try out the team's 2017/18 mule ahead of the Mexico ePrix, where he will subsitute for Toyota WEC driver Jose Maria Lopez in shakedown.

Pressure on Buemi to build lead

Gaillardot also described the pressure that Renault e.dams is putting on itself to create a big enough gap this season for Sebastien Buemi to absorb the damage of missing the New York ePrix races in July.

Like Lopez, the Swiss is also due to arrive in Mexico late after flying overnight from Toyota's WEC launch in Monza, with Oliver Rowland poised to replace him for shakedown.

“We have to make the gap bigger," Gaillardot said. "We know we will lose Sebastien for the New York races and also Mexico will not be easy as he will land on race morning just before practice.

“We have a good points advantage now for him to try and secure the title again, so we have to get the big points as much as we can.

“I think in terms of powertrain efficiency now everybody has developed a good powertrain, so the opposition is very dangerous.”