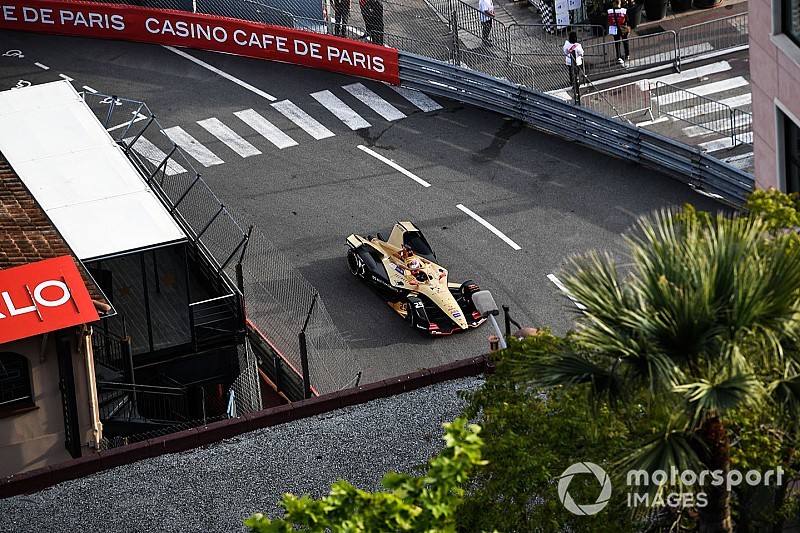 Nissan e.dams driver Rowland, who came through the third segment of group qualifying, set the best time in Super Pole with a 50.021s – 0.174s slower than the lap he set to top FP2.

But as he has a three-place grid penalty for hitting Alexander Sims during the wet race conditions last time out in Paris, Rowland loses pole and will start fourth.

Vergne was quickest in the first sector on his Super Pole lap, before losing fractions in the second and third segments to wind up 0.021s adrift of Rowland’s best.

Mitch Evans took third place but is under investigation for a possible Super Pole procedure infraction, which is believed to be activating his 250kW power mode too early.

Pascal Wehrlein ended up fourth for Mahindra Racing but will be promoted ahead of Rowland, with Venturi’s Felipe Massa starting fifth.

Sebastien Buemi, who won both of FE’s previous races in Monaco, finished sixth in Super Pole after losing time in the opening sector.

Sims ran early in group three, slotting into third in the group standings, which were topped by Vergne, before he was shuffled back to seventh, missing out on Super Pole by 0.104s.

Maximillian Gunther was 14th for Dragon, but he will drop to the rear of the field after getting a 10-place penalty for picking up a third reprimand of the season for speeding during the full course yellow test in FP1.

Andre Lotterer ended up 22nd and last on the timesheets for DS Techeetah. He was the first driver to complete a lap in group one, but a lock up at the second part of the Swimming Pool complex and what looked like a brush with the barrier at the last corner cost him time.

Jerome d'Ambrosio (Mahindra) and Edoardo Mortara (Venturi) both move down three places because of penalties from Paris, and will start 18th and 20th respectively.