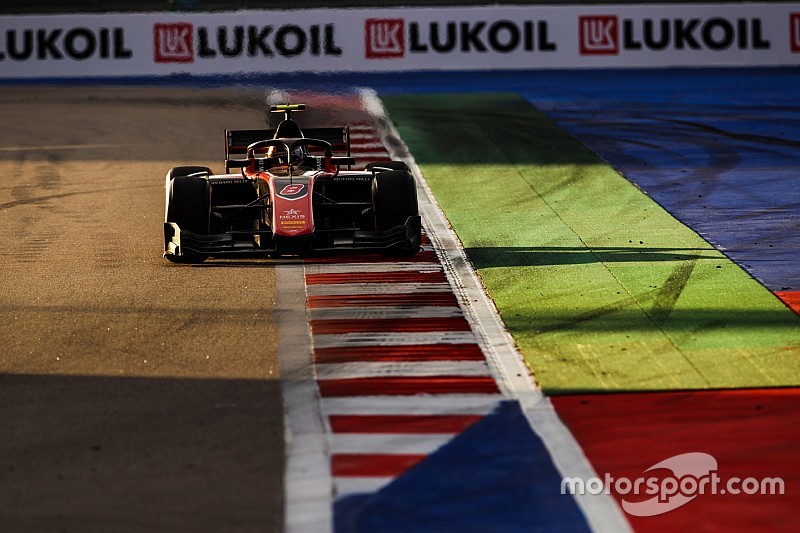 By winning and setting the fastest lap, Russell is 37 points clear in the lead of the standings - with 48 up for grabs in the Abu Dhabi finale.

Russell was up to second a few corners into the race thanks to Alessio Lorandi hitting Nicholas Latifi at Turn 5 ahead of him.

The incident prompted a safety car period and, after the restart, reverse grid pole-sitter Nirei Fukuzumi couldn't keep pace with his closest challengers as Russell and Sergio Sette Camara both dispatched him in quick succession.

Soon afterwards it started raining and, after Niko Kari and Jack Aitken both spun out, the majority of the field pitted for wets.

Charouz duo Antonio Fuoco and Louis Deletraz were the only ones staying on slicks, hoping the track would dry out as the rain soon stopped.

However their stints in first and second were short-lived, with Russell soon retaking the lead and dominating the rest of the race.

His gap was at the finish line was 7.4s from Sette Camara, who came under late pressure from Alexander Albon.

Fukuzumi had to settle for seventh with Dorian Boccolacci stealing eighth from Fuoco on the last lap.

Fuoco's pace on slicks was never comparable to those on wets and he had to settle for ninth ahead of Maximilian Gunther, while his teammate Deletraz was only 13th.

Lando Norris' difficult weekend continued as, having recovered from 18th to 12th in the early stages, he got a stop/go penalty for being out of position when crossing the safety car line on the formation lap.

He was then hit by Arjun Maini and retired with a puncture, formally dropping out of the 2018 title race.