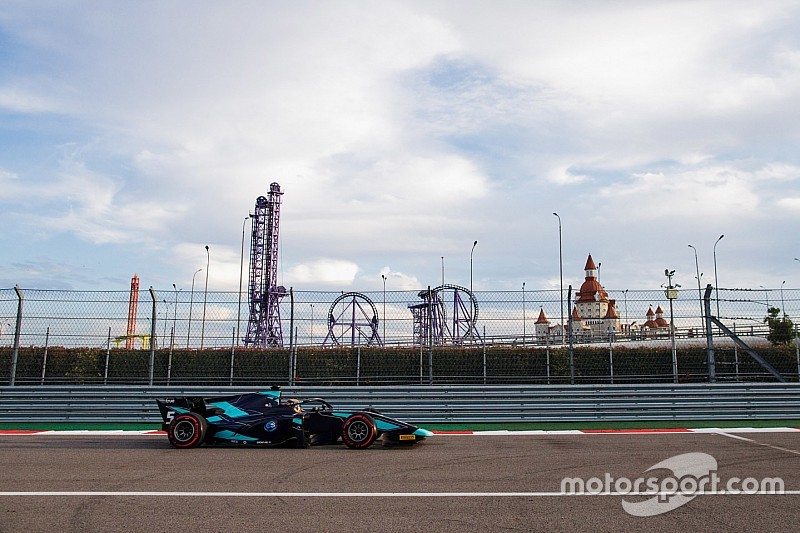 Starting fifth, Albon gained two places at the start and then passed Russell at Turn 2 for second a few laps later, to run behind pole-sitter and early leader Nyck de Vries.

The majority of the field, and everyone in the top eight on the grid, started on supersofts, but they only had a handful of good laps before they started to lose out to those on softs.

Markelov in particular excelled on the soft compound as he gained 10 places from 19th on the grid in just two laps, and was up to fourth by lap 5.

The Russian then took the lead as the top three pitted on the same lap, and Albon moved ahead of de Vries, who had a sluggish stop.

Markelov rapidly pulled away from those on the same strategy as him, turning a 1.2s gap on lap 7 over Antonio Fuoco to 13.3s by lap 18.

However, rather unexpectedly, the Russian dived into the pits with nine laps remaining and he lost out massively during his stop as his team was seemingly not ready for him. Markelov eventually finished only 12th.

As a result, Albon comfortably returned to the lead by the time all the pitstops were completed, building a comfortable gap over de Vries as the duo had to manage their way through traffic.

De Vries survived an accident with Arjun Maini, but had to give up second to Nicholas Latifi when he had a massive lock-up with just three laps to go.

After a brief virtual safety car stint caused by Maximilian Gunther spinning out on track after contact with Markelov, Albon eventually won by 11.3s with Latifi completing a DAMS 1-2.

Russell took fourth and extended his lead to 30 points as his erstwhile main rival Norris endured a difficult race.

The McLaren junior had a poor start from second on the grid to drop to the lower half of the top 10.

When he dived into the pits, he first missed his pit position, and then was released before his front right tyre was properly fitted, which led to his retirement.

As a result, Norris dropped behind Albon in the standings, and is 34 points behind Russell.

Norris' teammate Sergio Sette Camara finished fifth ahead of Fuoco, who was the best of those running on the alternate strategy.

The top 10 was completed by Honda juniors Nirei Fukuzumi and Tadasuke Makino, the latter miraculously avoiding a big crash with Luca Ghiotto right at the start, when the duo made contact in the fast Turn 1 right-hander.

While Makino continued, Ghiotto damaged his car and retired in the pits, joining Sean Gelael, who stalled on the formation lap.

Niko Kari also couldn't finish his first-ever F2 race despite impressing in the early stages, even passing Fuoco for second at one point.