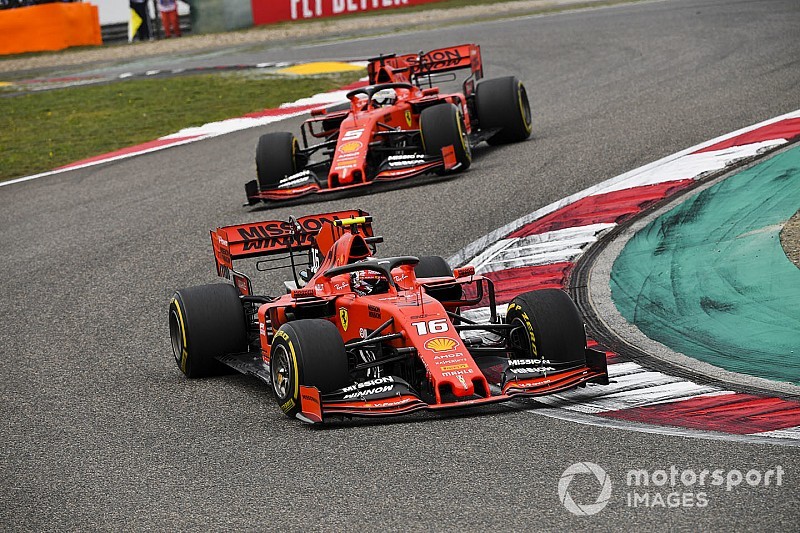 Mercedes team principal Toto Wolff believes Ferrari risks opening "a can of worms" by ordering its Formula 1 drivers to swap positions but is not alone in facing that problem.

Early in the Chinese Grand Prix, Ferrari told Charles Leclerc to move aside for Sebastian Vettel, who the team has named its default leader in its quest for a first title since 2008.

Ferrari did so because Leclerc seemed to be struggling more with his tyres than Vettel, who the team wanted to release to try to keep pace with the dominant Mercedes duo out front.

Wolff said: "That's a tricky situation because you would like the quicker car hunting down your opponents and Sebastian said he had the quicker car at that stage and they reverted the order. I can understand that.

"Nevertheless, when you start doing these things it becomes very complicated and you start a precedent and open a can of worms. Then you might have to call at every race that the car behind can go quicker.

"So, it's not an easy situation and we have been there with Nico [Rosberg] and Lewis [Hamilton] and with Valtteri [Bottas] too."

Mercedes acted decisively late last season when implementing team orders, most notably at the Russian Grand Prix where race leader Bottas was told to move aside for championship contender Hamilton, who was being caught by Vettel's Ferrari in the race.

In China, Mercedes protected its result by pitting Hamilton and Bottas on the same lap, which Bottas said ended any chance he had of fighting his teammate for the win.

"We had a situation today where they were pushing each other very hard and taking a risk to potentially not finish the race," said Wolff. "It's not a Ferrari problem alone, every team has that issue if you have two alpha drivers."

Leclerc's race ended up severely compromised in China, with the early team order leading to him dropping behind Max Verstappen as well.

He was unable to fight back against the Red Bull driver because Ferrari then extended his second stint as it assessed keeping him on a one-stop strategy.

Leclerc eventually stopped again, but had lost too much time to Verstappen to recover.

Red Bull team boss Christian Horner said Leclerc was "hung out to dry" but only because his team had forced such a strategy.

"I don't think we had a faster car than Ferrari today, and so our best way of beating at least one of their cars was going on to the two stop," said Horner.

"That then sparked some discussion between Sebastian and his pitwall as to whether or not they were going to stop at all. But in the end they covered [Verstappen], Mercedes had to cover him, and Leclerc got hung out to dry a little bit."