On April 3rd, the news that Mark Webber may leave Formula One at the end of 2013 was a rumor. Now it seems that apparently the Australian will join Porsche to take on the 24 Hours of Le Mans.

By:
Nancy Knapp Schilke
Listen to this article

Nearly 24 hours after the FIA Formula One Championship Chinese Grand Prix, the rumor that Mark Webber would leave the Red Bull F1 team for a new challenge in 2014 has hit the news wires. During the two week break between the Malaysian race at Sepang and the race in China, Webber returned home to Australia to ponder his future.

Webber had admitted that he was talking to Porsche on a possible return to the 24 Hours of Le Mans. It would also be the return for Porsche in the LMP1 class with their new prototype. Apparently now Webber has confirmed that he has signed a five-year agreement with the German manufacturer which will not only include the prestigious 24 Hours of Le Mans on the La Sarthe circuit in France, but also a full-season ride in the FIA World Endurance Championship.

The WEC teams just held their season opener at Silverstone where Radio Le Mans reported that Webber has signed a five-year agreement with Porsche.

While the rumor appears to now be solid, Porsche has yet to confirm. At this time the German manufacturer has a future test plan for the new prototype plus they have factory drivers on hand.

Webber has been with the Red Bull team since 2007 but the past years have not been easy on him as it was obvious that he became the "2nd driver" once Sebastian Vettel became the team's star driver; especially after the German became the youngest driver to win the championship. Yet it has only been since last year that indeed Vettel came first even to the point that Webber aided his teammate in the season finale to earn his third crown by three points over Fernando Alonso.

The writing was on the wall for this season which opened the door for Webber to start looking for a new adventure.

The second race of the Formula One season drove home the point when Webber had the lead and was on his way to victory with his teammate behind him. The controversy made headlines when Vettel made the move to overtake Webber -- and the two nearly made contact that would have ended both their hopes of the victory. 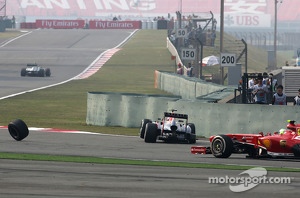 The Australian’s contract with the Red Bull F1 team expires at the end of the 2013 season with recent rumors that he could be replaced during this year. Webber and his teammate have been at odds with one another since the Malaysian GP. Obviously it might sealed the deal for Webber to make a change in direction. If not before the race in China, surely the fact that he ran out of fuel during qualifying and could not challenge for the pole in the final qualifying segment. Plus during the race -- after a pit stop -- the team had him limp the car back to the pits but before he could safely return, the tyre went flying off; ending his race.

"We have had a few problems this weekend," commented Webber after the Chinese GP.

Vettel is the team’s three-consecutive Formula One World Champion for the Red Bull team and no doubt Webber has made a sound decision for his future.

Chinese Grand Prix – Who was your Driver of the Day?