Sergio Perez tweeted he was out at McLaren before the official team announcement.

Sergio Perez did not hesitate in letting his fans, the media and the world know that he and the McLaren team have parted ways. The Formula One driver from Mexico used twitter to make the announcement.

“First of all, I would like to thank McLaren for giving me the opportunity to be with them this season. I have always given the best of me for the team and still despite this I could not achieve what I aimed for in this historic team."

Perez added, "It has been an honor for me to have been in one of the most competitive teams in the sport and I do not regret even a bit having joined them." 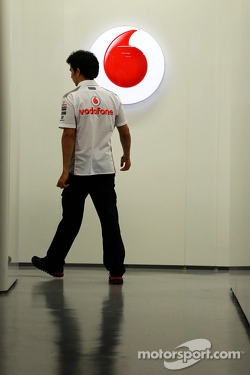 The handwriting has been on the wall that the Mexican Formula One driver might be out of a seat in favor of Kevin Magnussen for the 2014 season. While the team has not yet confirmed their young development driver, today they focused on Perez and this weekend's US Grand Prix.

Martin Whitmarsh said: "First of all, we would like to thank Checo for his kind and gracious statement, and for being a fine team member during the 2013 Formula 1 season."

"There are still two Grands Prix yet to run this year, and our collective focus is on scoring as many points as we can in those two remaining races."

The Mexican driver will be "seeking other opportunities" but for now Perez will focus on the final two events.

Whitmarsh commented, "Checo has made many friends during his time at McLaren - and, together, as a team, we intend to do our utmost to help him finish his year with us with two good results, especially here in Austin, where he has so many fans.

"We wish him well for the future, and are sure that he will have many successes ahead of him."

Perez ended his tweet with “Thanks to McLaren and all of its partners for this season, you can rest assured that I will never give up.”