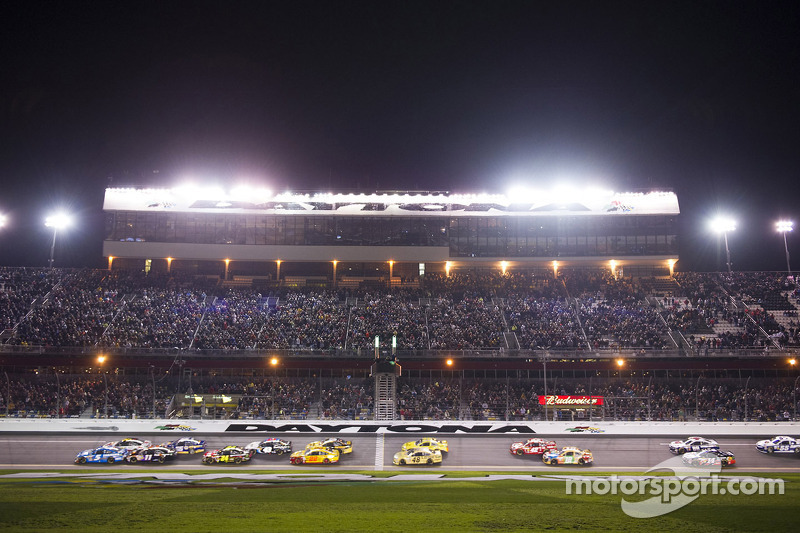 Besides the pole winners that have clinched a spot, there are three past Sprint Unlimited champions on the list.

With two races remaining in 2013, 17 drivers already know they will contest the 2014 Sprint Unlimited for the cash. Three are eligible as past winners in the non-points NASCAR season opener. Those not on the list still have a shot at earning the pole position at Phoenix and Homestead-Miami.

The event will take place on February 15, 2014 at the renovated Daytona International Speedway to kick off the Budweiser Speedweeks.

The 75-lap race has always been a fan favorite as they cheer on their drivers who aim for the golden prize.

The three past event winners had to attempt to qualify in at least one Sprint Cup race this season to eligible. Terry Labonte won back in 1985, Ken Schrader took the back-to-back victory in 1989 and 1990. Injured in a sprintcar racing event this season, Tony Stewart looks to make his return to Cup racing next year, and the three time Sprint Unlimited winner aims to add his fourth victory; past wins were in 2001, 2002 and 2007.

The recent speed shown by Denny Hamlin has him on top of pole winning list thus far; he has four. Second high in poles is Hamlin’s Toyota teammate Kyle Busch with three.

The list is long for those who have notched at least two poles this season. They include Jimmie Johnson, Matt Kenseth, Dale Earnhardt Jr., Jeff Gordon, Ryan Newman, Carl Edwards and Joey Logano.

Making it into the field includes the one-time pole winners this season - of course we all would not be surprised if someone sneaks in for their first 2013 pole in either the penultimate or final race this year.

Stay tune to this weekend’s qualifying action in Phoenix to see if it is a repeat pole winner or one who is not on current list as there are several who have come close; including Clint Bowyer, Greg Biffle, Martin Truex Jr., David Ragan, Brian Vickers, and Kasey Kahne.

The winner in of the 2013 special event in Daytona was Kevin Harvick, and he has qualified for the 2014 event; however his victory was with the Richard Childress Racing team which he leaves at the end the current season.

In 2014, both Harvick and Kurt Busch will be with Stewart-Haas Racing.

PIR-fect result would be win for Jeff Gordon