‘We got quite crazy with it’: Inside Formula 1’s driver chess club

Formula 1 knows all too well just what a game-changer a Netflix series has been for its profile, enjoying a boom off the back of Drive to Survive’s success.

But it is not the only sport or pastime to enjoy such a surge. In October 2020, The Queen’s Gambit became a hit on Netflix, based on the 1983 novel about a female chess prodigy, played by Anya Taylor-Joy, who rises to become the greatest player in the world.

It resulted in a massive swell in interest for chess. Retailers reported sales for chessboards were up as much as 1,000%, according to The New York Times, while new sign-ups to chess.com, one of the world’s biggest online chess websites, were seven times greater than usual.

But it was not only the general public who entered 2021 with a heightened interest in playing chess, which, along with golf and padel, has become one of the major new hobbies for F1 drivers this year.

Ferrari drivers Charles Leclerc and Carlos Sainz Jr are the two drivers who have taken chess the most seriously this year. As well as excelling on-track as team-mates, helping lead Ferrari to third place in the constructors’ championship ahead of McLaren, Sainz and Leclerc have also become good mates off-track. It’s given a youthful, fresh feel to the atmosphere at Maranello.

Chess is an interest that has always been with Leclerc, but as he and Sainz looked for something to do during the quiet periods at the start of the season, it quickly got competitive.

“I’ve actually always been into it, I always liked chess as a child,” Leclerc told Motorsport.com.

“I think it was during all the media days at the beginning of the year, we didn’t know what to do and I was playing chess, and he saw me, and said OK, I’m downloading this.

“We got quite crazy with it in the first part of the year. We played against each other, and we’ve never stopped.”

It was a new obsession for Sainz in particular. “He freaking loves his chess with Charles,” said former McLaren team-mate Lando Norris. “I think I might have beaten him in the first game - then I just quit! I might be wrong, he’d probably tell you I’m lying…

“He was playing like hours and hours of it, him and Charles. I never knew he played before.”

From flights between races to between sessions in the car, and even during the lengthy rain delay at the Belgian Grand Prix, Leclerc and Sainz have been glued to their phones playing each other using an app.

And unsurprisingly, it has become incredibly competitive. In a video for Autosport earlier this year, Leclerc and Sainz debated who was better at chess and won games more often.

“Today we played on the plane, and it was 2-2,” Sainz told Leclerc. "And you didn’t want to play the last one. So if anything… I had the upper hand.”

“No, no,” replied Leclerc. “Remember Spa?” Sainz claimed he lost because he was so focused on the race.

“He’s very good at chess in the night, so whenever we come back from races from 9pm onwards, he’s very good,” said Leclerc. “But in the morning to the evening, I’m much better.”

But Leclerc and Sainz are not the only drivers to have gotten hugely into chess this year. Between sessions and various commitments down at Haas on race weekends, Mick Schumacher is another driver who will typically be found playing the game with any free time available.

A chess board has become part of Schumacher’s essential kit to take with him to races, giving him the chance to sit and play to unwind. Schumacher typically plays with Kai Schnapka, a physio who worked with Michael Schumacher towards the end of his F1 career before linking up with Mick in junior categories. Schumacher also played some games with Timo Glock, but is yet to play the Ferrari drivers.

Yet it was only by accident that Schumacher really got into chess. “We have a chess board at home, we’ve always been playing it here and there, but never properly,” Schumacher told Autosport/Motorsport.com.

“We were very big into backgammon, Kai and I. And then we actually stopped playing - we forgot our backgammon board, and the only thing we had was chess, so we started playing chess!

“Then for a time, we were mixing chess and backgammon, and now basically we just play chess. It’s fun, I beat him the whole time!” 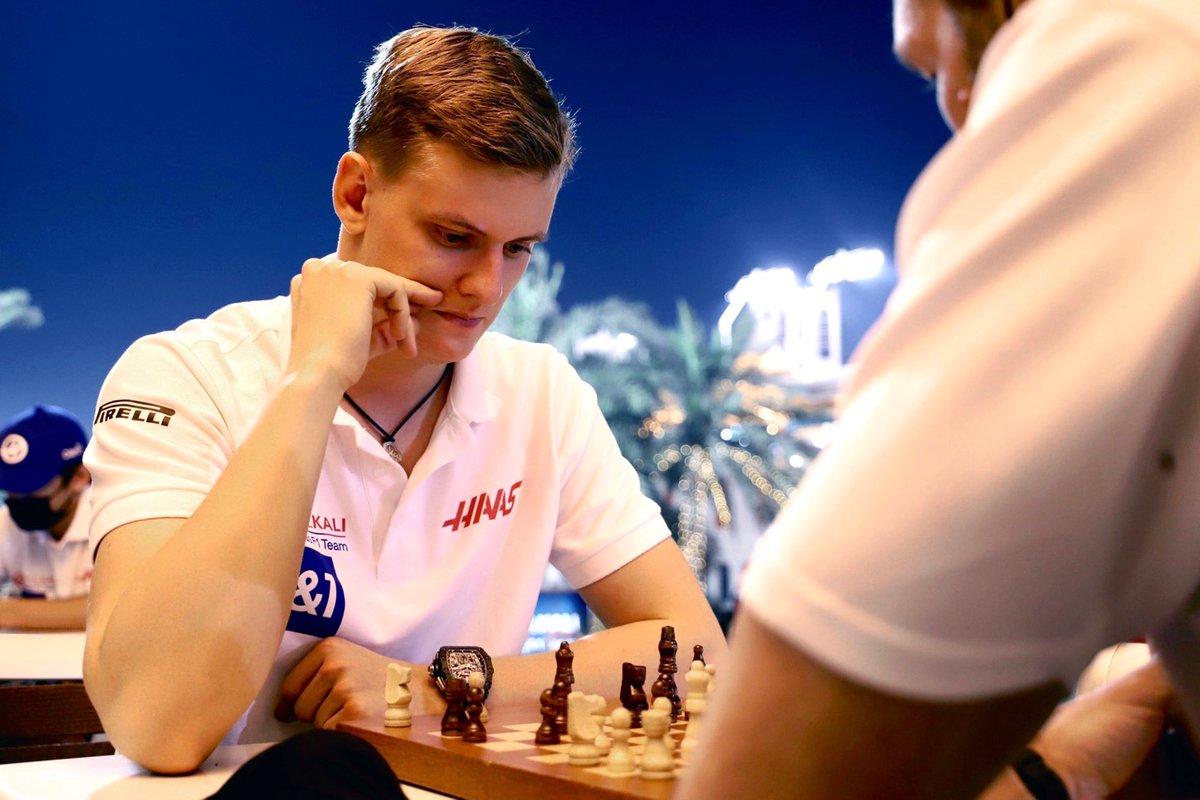 Chess is something Schumacher has found himself improving at as the year went on. “At the beginning of the year I was losing most of them,” he said. “Then for some reason I’ve understood the game a bit better and started winning most of them.”

That kind of mental improvement is exactly the benefit Schumacher sees in test. Back in May, he discussed the benefit of playing such games in an interview with GP Racing.

“I feel like these games kind of bring focus back, as you always have to be switched on with your mind,” Schumacher said. “In a weekend, I always want to be mentally ready for every challenge that comes.”

Next year’s 23-race season is set to give drivers more time than ever on the road, meaning more flights and more periods at racetracks to fill between their racing duties - and for F1’s unofficial but growing chess club, perhaps some more members.