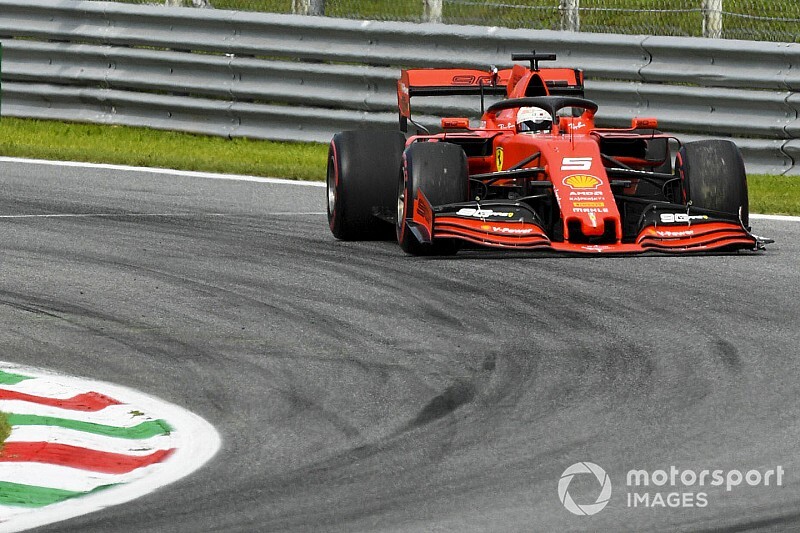 Sebastian Vettel has been handed three Formula 1 licence penalty points for his "dangerous" incident in the Italian Grand Prix, leaving him one serious incident from a ban.

Vettel spun at the Ascari chicane early in Ferrari's home race, then rejoined as the chasing pack was filtering through the fast right-hand middle part of the corner.

He was fortunate to avoid heavy contact but he did collide with seventh-placed Lance Stroll and sent him into a spin.

In their official report, it was noted that "the stewards considered this to be a dangerous incident".

Vettel was therefore handed a 10-second stop-go penalty for rejoining the track in an unsafe manner, and had three penalty points added to his licence, taking his tally to nine points in a 12-month period.

Three points is the maximum penalty points the stewards can apply to a driver's licence and it is reserved the most serious driving offences.

If a driver accumulate 12 penalty points in a 12-month period, they receive an automatic one-race ban.

Vettel must complete the next three F1 races without accumulating three points or more as he will not lose any of his current penalty points until after the Japanese Grand Prix.

"I lost the rear, couldn't catch it," said Vettel of his mistake to Sky. "As simple as that. I'm obviously not happy and after that the race was obviously gone.

"I struggled a couple of times to get the car going and struggled to get in the right direction so I couldn't see him."

Stroll received a drive-through penalty and two penalty points in his licence for a similar albeit not as severe piece of unsafe rejoining.

After his spin, he was getting going again on the exit of Ascari as Pierre Gasly rounded the corner.

The stewards noted that Stroll "left the track due to the collision" with Vettel but still felt he was responsible for rejoining unsafely and forcing Gasly off the track.