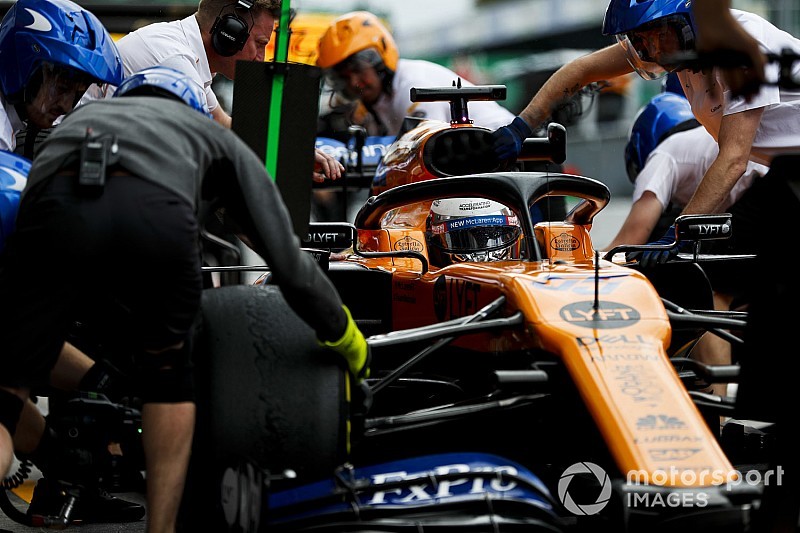 The McLaren Formula 1 team has been fined €5000 for the unsafe release of Carlos Sainz during the Italian Grand Prix.

Sainz looked set for a sixth-place finish before he made his pitstop, during which the front right wheel was not attached properly, forcing the Spaniard to retire from the race just seconds later.

The stewards deemed the incident an unsafe release and thus fined McLaren, although they noted Sainz stopped the car as soon as he realised.

"The Stewards determined that the car was released in an unsafe condition in breach of Article 28.13 c) of the FIA Formula One Sporting Regulations," the stewards said. "We note that the driver stopped the car as soon as the problem with the right front wheel became evident."

Sainz labelled the pitstop a "bit of a disaster" after the race.

"It was a bit of everything," he said when asked to explain what had happened.

"The light turned green and I thought the car was ready to go, then [it] turned red again, we lifted the car again, they fitted the tyre again, we got the car down again and it looked like we were ready to go but then...

"It was all a bit of a disaster, but these things happen. We are all human and we can all make mistakes. Maybe there was something broken somewhere. We need to analyse, learn and improve."

Despite the disappointment, the McLaren driver felt that was no reason to blame the team, as he reckons strategy and pitstops have been one of its strongest points in other races.

"It's a shame, because sixth place looked more or less secured the ways things were going today," Sainz added.

"The Renaults were faster and [Red Bull driver Alexander] Albon couldn't pass me when he caught me with the soft tyre and I thought he would be faster with the mediums. I had some problems after the contact with Albon. We lost a piece at the back of the car and we were losing two or three tenths per lap.

"But everything was going well. Then came the pitstop and it was a bit of chaos and there was a bit of a misunderstanding and we couldn't make it.

"But the pitstops and the strategy have been very good this year. Today maybe we lost eight points because of it, but we've gained a lot more points thanks to strategy and pitstops this year than we we lost today, so it's time to analyse, to learn what we could have done better, but we don't need to be too sad."