Vettel ran first on the road during the opening run of Q3, and posted a time only good enough for fourth place as teammate Charles Leclerc benefitted from a tow further in the pack to secure provisional pole.

Leclerc was supposed to run ahead of Vettel on the second run, but a messy final out-lap with cars jockeying for position meant Vettel was among the many cars failing to start a flying lap in time.

He was thus consigned to fourth on the grid, as Leclerc went unchallenged for pole - although the events of the session remain under investigation.

“I think we went out late, everyone, and then obviously you always look for a tow,” Vettel said. “It was my turn to get a tow, I was the one first in Q3 to give a tow, and the one second to receive a tow, but obviously we waited too long, so in the end there was no margin.

“Not happy. The lap was really good that I had on my own, I just had no tow.

“I think we just didn't execute what we thought to do today. Anyways, for the team it's good, it's a good result, so let's see what we can do tomorrow.” 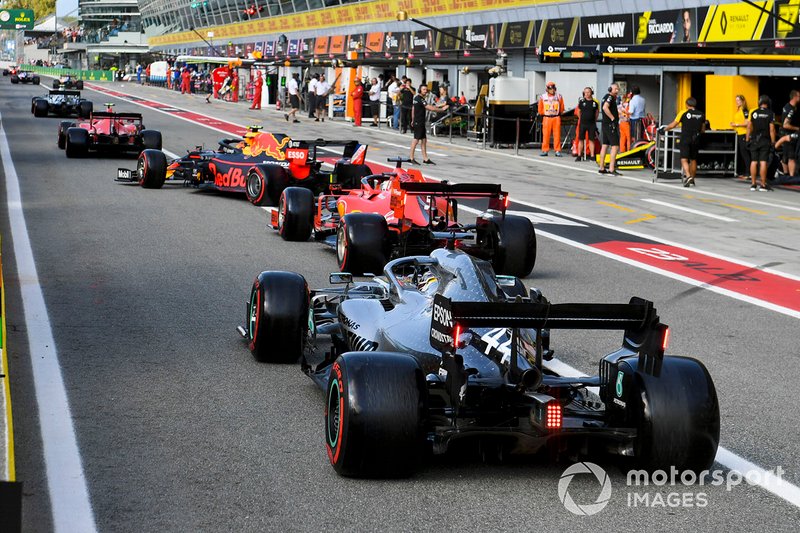 Vettel was seventh in the overall running order, and behind Leclerc, as the cars ventured out of the pits for the second run in Q3.

But as the pack bunched up at the Rettifilo chicane, Vettel overtook Leclerc exiting the corner and now found himself sat behind Carlos Sainz and Nico Hulkenberg, gesticulating wildly for the cars around him to get a move on.

He overtook the pair in time for the second chicane, but waited for Leclerc while running at the front and was passed back by Sainz.

Leclerc then ultimately got ahead on the run down to the Parabolica, but the four-time champion subsequently ran out of time to start a flying lap.

Asked for his view of the events, Leclerc said: “There was the huge mess in front of Turn 1 and 2, and the McLaren and Renault stopped in the middle of the track and we had nowhere to go.

“Seb overtook me there, with the mess, because obviously we were aware it was quite tight on time. And then I stayed basically behind Seb until the last straight, where I heard also on the radio 'you can overtake Seb', so I overtook him.

“I don't think I could've done much more.”

Vettel said he was surprised Leclerc had passed him where he did, saying that by then “there was no point”.

“I thought internally we had a better way that we communicated this - I was the one out front alone in the first run and I shouldn't have been the one in front in the second run, which, because of the last corner [overtake] I wasn't, but at that point I was too close anyway, plus the session was over so I couldn't even make it to start the lap, so I can't be happy with that," Vettel said.

“He [Leclerc] should've been ahead all the way. Anyways, happy with the car, the qualifying was good, the car was very good, I had a very good lap, I just had no tow - that's the difference between pole and no pole today."