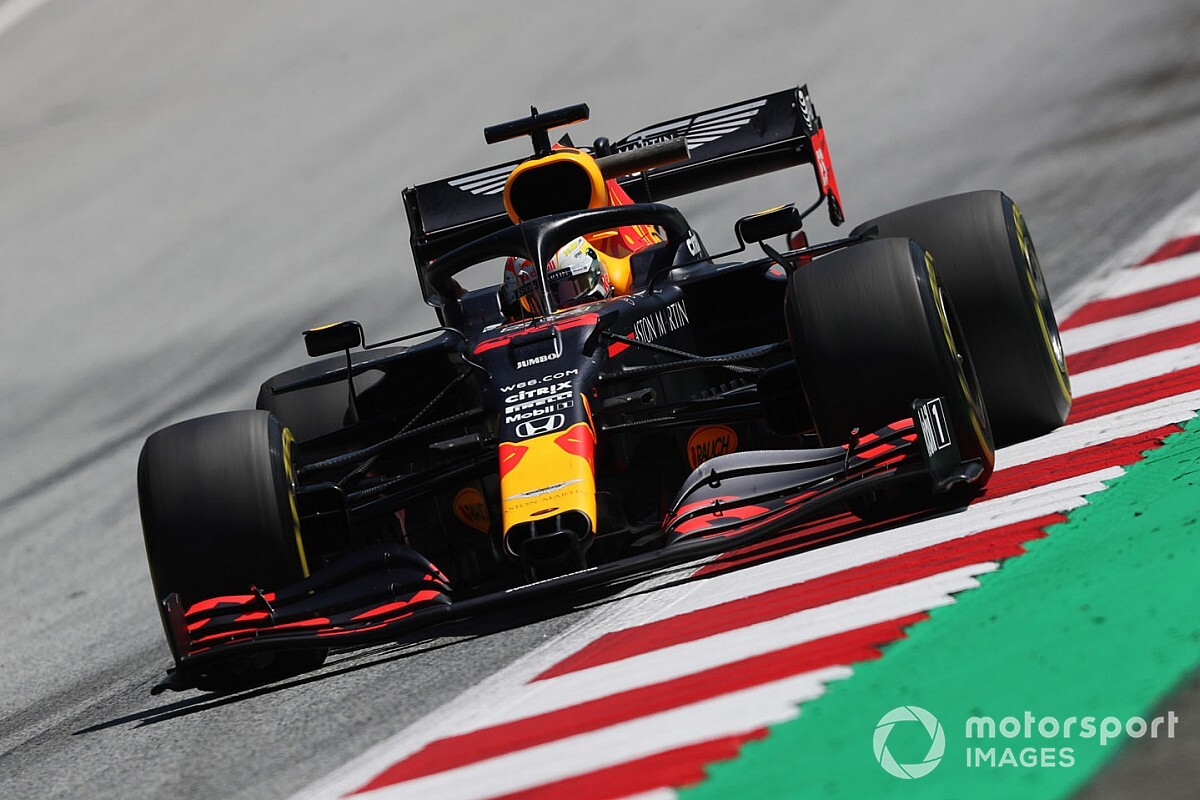 In a session that could end up setting the grid for should qualifying be cancelled due to forecast rain, 2019 Austrian Grand Prix winner Verstappen managed to edge out Mercedes' Valtteri Bottas for top spot in the timesheets.

Verstappen recorded a best laptime of 1m03.660s to take top spot for Red Bull, making the most of extended qualifying simulation running through FP2.

The session was red-flagged after just 13 minutes following a hefty crash for Renault driver Ricciardo at the penultimate corner.

Ricciardo lost the rear-end of his Renault R.S.20 car as he turned in to the fast right-hand corner, causing him to spin backwards into the barrier.

The crash left the car with a damaged left-hand side and rear wing, while Ricciardo appeared to be limping slightly as he walked away from the incident.

He went to the medical centre for a check-up and was subsequently declared fit, but was shown to still be limping when returning through the paddock.

A 15-minute wait followed under the red flag as the barrier repairs were completed and Ricciardo's car was returned to the pits, with Renault facing a sizeable repair job this evening.

Knowing FP2 could set the grid for Sunday's race, teams opted to spend a lot of time on their qualifying simulations mid-way through the session.

The Racing Point duo of Sergio Perez and Lance Stroll set the initial pace during their soft-tyre runs, sitting 1-2 at the halfway point in the session. Stroll completed three separate runs on fresh tyres, while Perez was able to get within one-hundredth of his Q3 time from last Saturday.

Championship leader Bottas was able to depose Perez at the head of the timesheets by almost two-tenths of a second, only to then be pipped by the Red Bull of Verstappen.

Verstappen had a handful of times deleted for exceeding track limits, but managed to hook up a lap on a set of soft-compound tyres to grab top spot by 0.043 seconds.

It left Bottas to settle for second, but Mercedes teammate Lewis Hamilton struggled to a lowly sixth place after struggling during his qualifying simulation runs.

The team reported that Hamilton was unhappy with the car, prompting it to complete a set-up change and check the alignment of the W11 before investigating his struggles this evening.

Perez and Stroll were able to retain third and fourth in the final classification ahead of McLaren's Carlos Sainz Jr. in fifth, with Hamilton following in P6.

Ferrari had another difficult session as Charles Leclerc led its charge in ninth, but teammate Sebastian Vettel finished a lowly 16th, having feared damage to the right-hand side of the car after clouting the kerbs through the final sector.

Esteban Ocon rounded out the top 10 for Renault ahead of the AlphaTauri duo of Pierre Gasly and Daniil Kvyat, whose attempts at practicing giving a slipstream ended in an angry tirade over the radio from Gasly.

Kimi Raikkonen and Antonio Giovinazzi finished 13th and 14th respectively for Alfa Romeo, followed by George Russell in 15th for Williams, who returned to the cockpit after giving up FP1 to reserve driver Jack Aitken.

Also enjoying his first extended running of the weekend for Williams was Nicholas Latifi, who was sidelined in FP1 by a gearbox issue. Latifi ended the session 17th, one place behind Vettel.

Haas drivers Kevin Magnussen and Roman Grosjean wound up in 18th and 19th place, more than two seconds off Verstappen's benchmark, and only ahead of Ricciardo who failed to set a time.