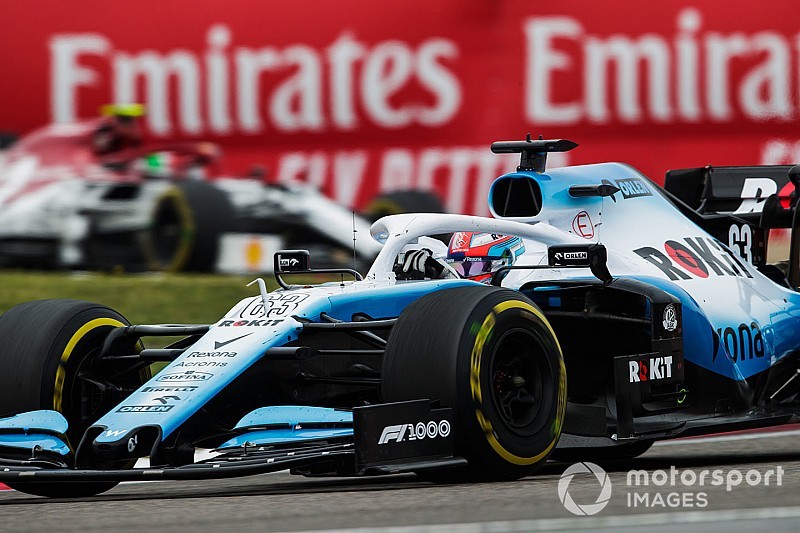 George Russell thinks he may be better off driving at 98% rather than his maximum potential to extract more speed out of his Williams Formula 1 car.

Despite impressing in his first three grands prix of the year for the troubled Williams outfit, Russell believes there is scope for him to do an even better job.

And he suggests one way is for him to slightly back off from being on the limit, so he can better ensure that time is not lost dealing with a car that can be unpredictable at times.

"I'm happy in some aspects," he said, reflecting on the job he has done in the first events of 2019. "There's definitely room to improve from my side. Certainly I haven't managed to optimise qualifying in the last two races.

"I think I still need to understand and respect the limitations of the car. Sometimes you would go quicker driving at 98% than at 100%. It's a learning process to understand the car and, unfortunately, we can't just go out and get the maximum from it because we're not 100% sure what the car is going to do from corner to corner."

Russell believes it is the inconsistent handling that is a big factor in holding him and teammate Robert Kubica back for now, but he hopes that updates that are coming for the next few races will help improve this area.

"The upgrades in terms of overall downforce are normal, so it's not like we have something special," he explained. "But we're hoping that it gives us something more driveable.

"I think there's more to gain through having a car that's driveable and consistent through a corner, that will help us gain a lot of lap time.

"At the moment Robert and I have a big issue with how the car is reacting on the entry and mid compared with the exit. It's very different in each stage, which is making it tough to drive."

While Russell accepts that any dramatic change in Williams' fortunes is unlikely in the short term, he thinks there is a chance that the team could find something that unlocks more speed.

"I'm really looking forward to Baku because I had a great weekend there last year in Formula 2, it was probably my strongest race of the year. We should probably have won both races, and anyway I won the second one from P12 on the grid.

"We have some small changes coming and hopefully, if they work as expected, it could be positive - but we're not 100% sure.

"I'm hoping, because we have some very poor characteristics, that if we improve that, the laptime gains will be larger. But at the moment there's nothing really suggesting that will be the case."

Why Rosberg is wrong about the 2019 Ferrari