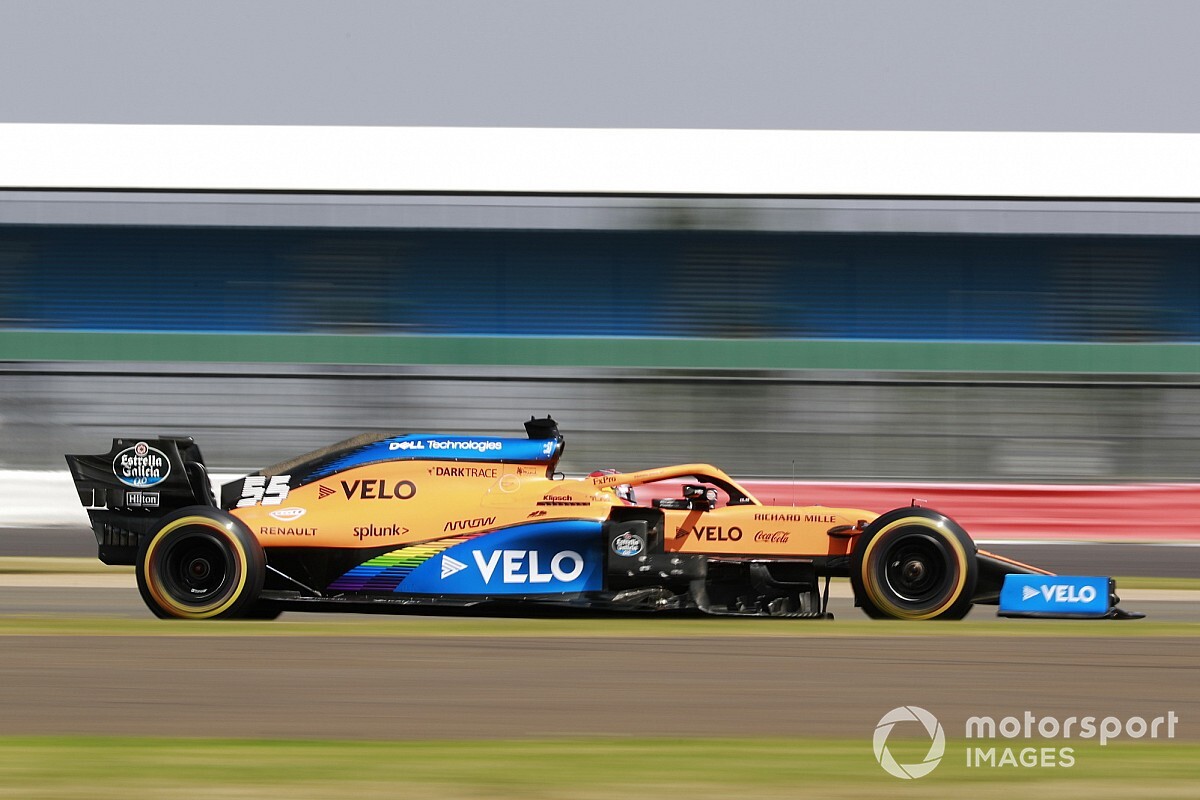 Carlos Sainz admits that there is a "question mark" regarding the cooling of his McLaren Formula 1 car after he was afflicted over the Anniversary GP weekend at Silverstone.

An issue with overheating forced Sainz's team to open up the car and generate more cooling, which in turn compromised the aero performance of the MCL35.

The problem was confined to the Spaniard's machine. He endured a frustrating weekend, finishing out of the points in 13th place, four spots behind teammate Lando Norris.

Ahead of the Spanish GP, Sainz is hopeful that the cause of the problem has been traced.

"We are putting everything in place this weekend to try and solve the issue," he said.

"The team will probably talk about it today, all the things that we're trying to change to try and address this issue, but from my side, I just can tell you that I was obviously not happy about last weekend, having to carry that deficit into qualifying and the race, which made obviously my life a bit more difficult.

"But at the same time, I'm confident that the team is trying to put everything they can together to try and solve this issue.

"We are not sure if I'm going to have it or not tomorrow, but we are sure that we are trying to solve it as much as I can. It will be continuous work going into tomorrow to see if the problem has disappeared.

"It's a bit of a question mark. And I don't know the answer yet, because we need to switch the engine on, go on track, and see if the problem is solved. But I'm hopeful after changing so much stuff that this is going to go away, and I can have a normal weekend."

Norris says that McLaren is keeping a close watch on how his car behaves this weekend.

"At the time it was more of a problem on Carlos's car, which like he mentioned was something that was a bit unknown, the exact reason for it," said Norris.

"They've made the changes of what they think might be affecting it for this weekend, and something that will be looked over very closely, as it's quite a high priority thing.

"And it cost performance, like Carlos said, so it's something that they will be looking at on my car, because obviously they don't want it to happen. But in Silverstone it was OK on my car."

Asked about form for his home event, Sainz admitted that this could be another tough weekend for McLaren after the team struggled at the second Silverstone event.

"It's a very good question that I'll be very happy to answer tomorrow evening when we have some laps in Barcelona," he said. "We probably have a track temperature of 30 degrees hotter than what we did here in winter testing. It's impossible to know.

"What I know for a fact is that [last weekend] it was warmer and we struggled a bit more with the management of the tyres and the handling of the car, so it's pretty warm here, so not over expecting too much.

"But at the same time we are an F1 team, we have had three or four days to analyse what went wrong, and hopefully we can get things a bit more together this week.

"The car in winter testing felt pretty good. I feel the last sector is a bit of a weakness for this car, so we need to keep an eye on it and see how we can keep improving in these areas."