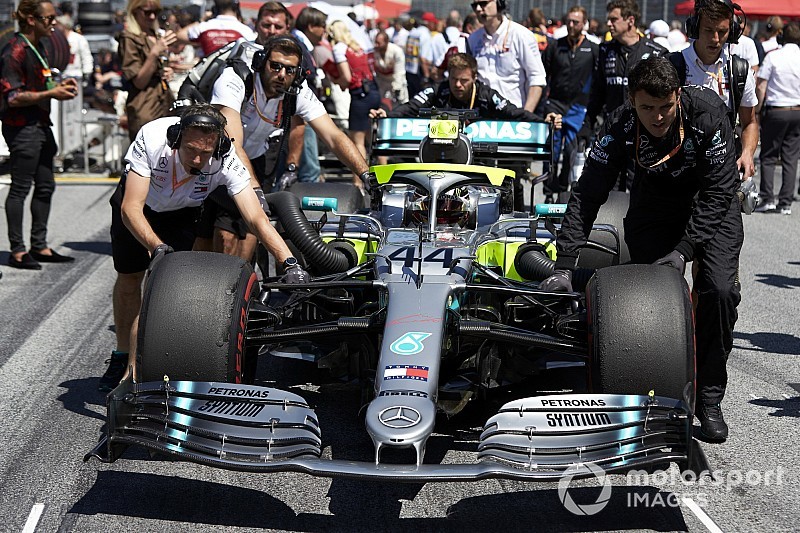 Mercedes Formula 1 team boss Toto Wolff says it was "painful" to see the cars of Valtteri Bottas and Lewis Hamilton handicapped by cooling issues in the Austrian GP.

The W10s were running the maximum available cooling set-up in Austria, and yet were still forced to run with restricted power, while both drivers compromised their laptimes with extensive lift and coast running as they attempted to cool their power units.

They eventually finished third and fifth, with Hamilton further compromised by wing damage that led to an extended pitstop.

Wolff said that the unusually high ambient of 34-35C combined with the 660m altitude of the Red Bull Ring to tip the power unit over the edge. He acknowledged that controlling temperatures had been an issue all year.

"We knew that it was our Achilles heel, and we were carrying the problem since the beginning of the season," said Wolff.

"We tried to work on mitigating the performance loss, but at the end, it was really painful to watch, cruising and not being able to defend or attack."

Asked by Motorsport.com if there was any margin, he said: "We were right on the limit, we couldn't do anything any more. It was already very damaging for performance, what we did. There was no step left any more.

"The next step would have been to remove all the bodywork. So that was not really an option, because the sponsors wouldn't have liked it!

"I think when you look at the positives we had the car pace, we were running the engine way turned down, lifting and coasting for up to 400 metres, that's almost having no throttle rolling downwards.

"And still able to pull in some decent lap times. I think we would have a chance to fight for the win, but we were limited by the cooling problems.

"I would have hoped for a little bit of a better result. When we were running second and third after Max's mishap at the start, that would have been my best case scenario. So coming in third and fifth is maybe a little worse, so around P2, P4 was what I expected."

Wolff conceded that with the current heatwave in Europe the team has to sort the cooling issues in the coming weeks.

"First of all I'm really hoping for the typical English weather in Silverstone, so we can gain a little bit of time to sort our problems out.

"But then there is no question, there is no alternative than to fix our problems for a the coming hot European races, Hockenheim and Budapest. The question is not how or if, but we will react. There is no other option."

Red Bull doesn't understand why it was so quick in Austria

The other Ferrari driver troubling a world champion