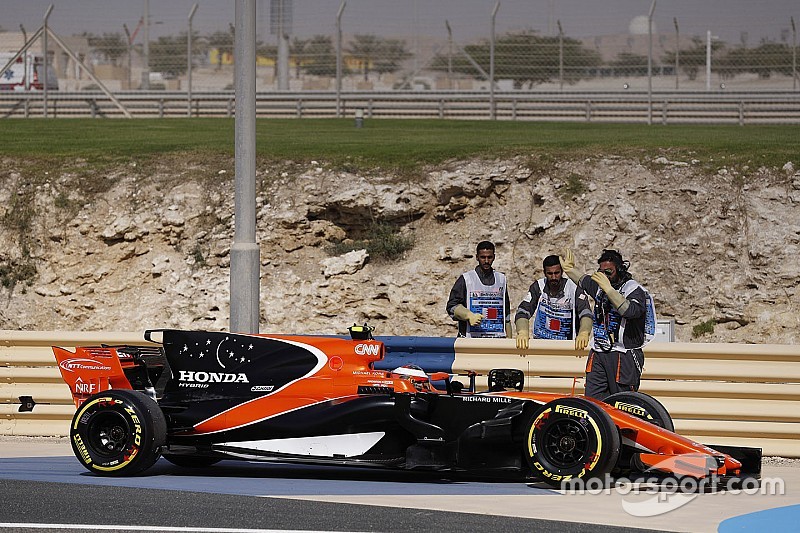 McLaren's Fernando Alonso and Stoffel Vandoorne will receive a MGU-H reliability update from Honda for this weekend's Formula 1 Russian Grand Prix following a series of problems in Bahrain.

Recurring MGU-H issues led to Alonso's engine failing in Bahrain GP qualifying, while Vandoorne failed to start the race, with the cause believed to relate to the same component.

Honda made temporary fixes to avoid a repeat of the problems during the two-day test that followed in Bahrain, with Vandoorne able to complete a full testing programme without problems on day two.

Since then, the Japanese manufacturer has been working on solving the problem and has moved to implement countermeasures.

Motorsport.com has learned both drivers will run new MGU-H components that have been updated for reliability in Russia, but it is believed it is not a brand new spec.

It means Vandoorne will use his fourth MGU-H of the season, meaning any subsequent change will lead to a grid penalty. Alonso will use his third.

"After a disappointing grand prix weekend in Bahrain, we have since had an extremely busy few days during in-season testing, also at the Bahrain International Circuit," said Honda chief Yusuke Hasegawa.

"The team has been working hard to implement some countermeasures to help combat our MGU-H issues.

"By the second day of testing, we think we were able to confirm the direction of our solution against the issue after completing 81 laps with Stoffel behind the wheel."

Vandoorne said the spirit of the whole team was lifted after McLaren encountered a trouble-free day on day two of the test in Bahrain.

"After a difficult couple of weeks, the last day of the Bahrain test was very encouraging, both for me and for the whole team," he said.

"It was a boost we needed and provided us with a lot of useful information about the direction we are taking the whole package in, so we go to Sochi with a better feeling than we had on Sunday night after a disappointing race."