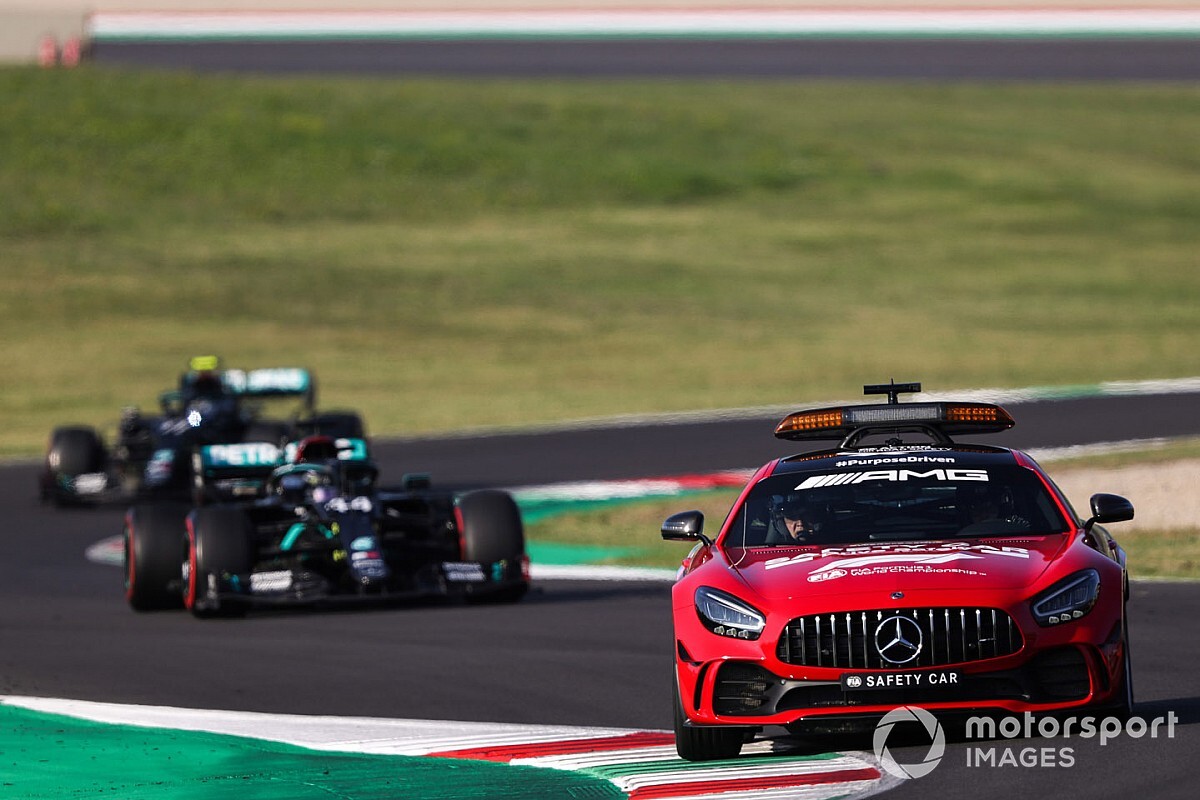 FIA Formula 1 race director Michael Masi says there's no need to review the safety car restart rules after the accident in the Tuscan GP – and he dismissed criticism from drivers.

Twelve drivers were given a warning after a post-race investigation of the accident that eliminated the cars of Kevin Magnussen, Carlos Sainz, Antonio Giovinazzi and Nicholas Latifi, and which led to a red flag delay.

After naming the 12, the FIA stewards noted "that the root cause of this incident was the inconsistent application of throttle and brake, from the final corner along the pit straight, by the above drivers".

They exonerated leader Valtteri Bottas, who is allowed to set the pace and accelerate when he chooses to, while others to avoid a warning were Lewis Hamilton and Charles Leclerc, who were second and third, plus Romain Grosjean, Sebastian Vettel and Kimi Raikkonen, who were at the back.

Several drivers, including Hamilton, suggested that the safety car lights being switched out late played a key role in triggering the incident, as it led to the field becoming bunched up.

Speaking before the verdict was made official, Masi made it clear that the drivers should know the rules.

"Well, it's still part of an ongoing stewards' investigation so I'm probably not going to go into a blame part," he said.

"But at the end of the day, there's probably some key points to take out of it [and] the drivers were all advised very clearly at the drivers' meeting on Friday night. There were two key parts to remind them.

"One was to ensure that they don't overtake the safety car before the safety car line at pit entry. The second part was, which is unusual for this circuit, is that the control line where they can overtake is located close to the pit lane exit.

"So it's not a surprise, and we've seen similar matters in Baku, with such a long run, let's call it, to the control line where the leader who has every right to dictate the pace has kept it quite slow to try and avoid a slipstream from the cars behind."

Asked about a possible review of procedures, he said: "I don't think there's any need to review the safety car restart rule."

Masi dismissed the suggestion that the safety car lights went out too late.

"Simply put, they can criticise all they want. If we have a look at the distance perspective, from where the lights were extinguished to the control line, probably not dissimilar, if not longer, than a number of other venues.

"And as we saw earlier today in the F3 race, those drivers in the junior category had a very, very similar restart to what was occurring in the F1 race, and navigated it quite well, without incident."

Was Bottas doomed to lose at Mugello?