Steiner: Magnussen right to stand up to "bully" Hulkenberg 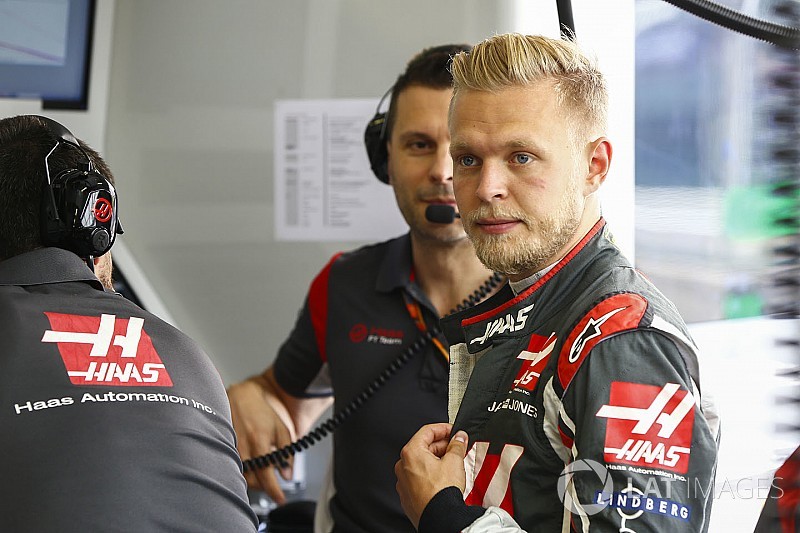 Renault driver Hulkenberg had been angered by Magnussen's robust late-race defensive manoeuvre and approached the Dane during media interviews to sarcastically congratulate him on being "the most unsporting driver".

In response, Magnussen told the German: "Suck my balls, honey."

Talking to the media afterwards, Steiner argued Magnussen's defensive move – which yielded a five-second penalty – was not over the limit, and criticised Hulkenberg for having clashed with Haas' other driver Romain Grosjean at the first corner of the race.

"Nico was the guy who destroyed Romain's race," Steiner said. "And then we get a penalty with Kevin.

"Kevin did the right thing and stood his point there, in my opinion. Why would he lift? It's a tough battle, and Nico went to the stewards to ask for a harsher penalty of Kevin, which I think is childish, immature.

"I mean, who ever has done that, you know? I'm almost speechless. I respect Nico as a driver and as a human being, but what he did there - you don't ask for a more severe penalty for somebody."

Asked by Motorsport.com whether Magnussen was right to use the words that he used in talking to Hulkenberg, Steiner stood by his driver: "It's the right way to say it. Why would he say anything else?

"Is it sporting to run into Romain? I mean, he [Hulkenberg] is a bully and he got away a long time with it and maybe now it's time that somebody stands up to him. He's a good driver, he doesn't need to be like this."

Steiner said he was planning to speak to Hulkenberg when F1 reconvenes at Spa-Francorchamps after the summer break, and added: "He does his job, he's doing a good job for himself.

"But it's like, if other people went down and obeyed with what he's saying, it's fine - I think we don't have to, you know? He's no world champion."

F1 team orders in Hungary: A question of honour, or a deal not clearly defined?

Mercedes reveals cause of radio meltdown