Lewis Hamilton has been excluded from Formula 1 qualifying for the Brazilian Grand Prix, resigning him to a back of field start for Saturday’s sprint race.

Hamilton topped qualifying at Interlagos on Friday afternoon, beating title rival Max Verstappen by four tenths of a second at the end of Q3.

But FIA technical delegate Jo Bauer found in his post-session checks that the DRS (drag reduction system) on Hamilton's Mercedes W12 car was not in compliance with the rules.

A hearing on Friday night was adjourned to Saturday so further evidence could be gathered, with Verstappen also being summoned to see the stewards for touching the rear wing of Hamilton's car in parc ferme, breaching the International Sporting Code.

Both drivers met separately with the stewards on Saturday morning ahead of final practice at Interlagos, with Verstappen being fined €50,000 for breaching parc ferme rules.

The stewards noted that there was "absolutely no movement" when Verstappen touched Hamilton's wing, and that he used an "insignificant force".

In a subsequent bulletin, it was confirmed that Hamilton had been excluded from the results of qualifying.

Mercedes argued in the hearing that the rear wing design had passed the FIA’s tests many times during the season and had always passed, and that as the DRS met the 85mm maximum requirement in the centre of the wing during the FIA tests, showing there was not an intent to breach the regulations.

Mercedes said it was therefore a case of “something gone wrong” that meant the wing failed the test, and had it realised sooner in qualifying, it would have sought permission from the FIA technical department to fix the part.

While the stewards were sympathetic to the argument and considered whether it was a mitigating circumstance, they “could not extend this argument to cover parts that were found out of conformity in post session checks with no obvious reason in evidence other than considering normal running at this event”, adding: “In the end, the regulations are clear and at the moment of the conformity check, the car did not comply.”

The stewards added they were “fully satisfied” Verstappen touching the wing was not the cause of the test failure and therefore “had no bearing on the case”.

The bulletin ends: “The Stewards agree with the Competitor that this is something gone wrong, rather than an intentional act or design but did not find there to be mitigating circumstances.

“Further, Art 1.3.3 of the International Sporting Code states that ‘it shall be no defence to claim that no performance advantage was obtained’.

“Therefore, the Stewards order the usual penalty for technical non-compliance of Disqualification from the qualifying session.” 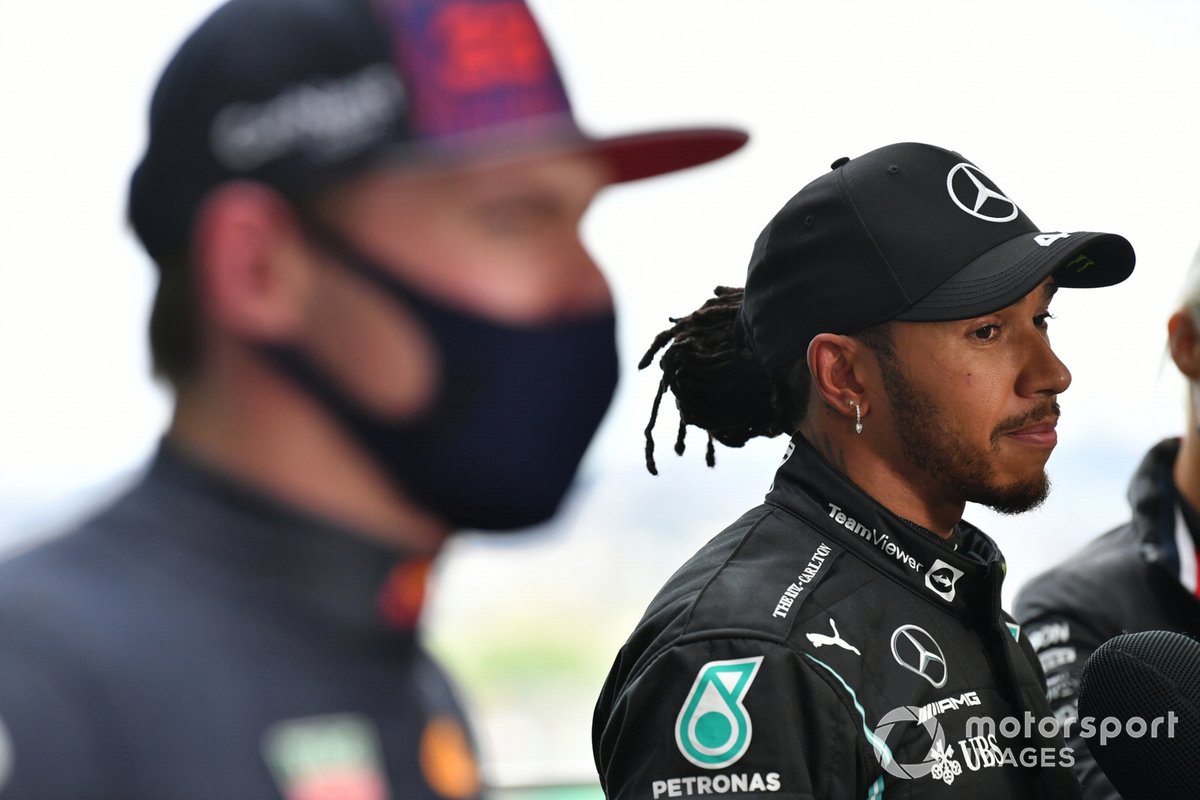 It means that Hamilton will now start Saturday's sprint race from the rear of the field - potentially from the pit lane - acting as a further blow to his championship hopes against Red Bull driver Verstappen.

Mercedes confirmed on Friday that it would be taking a fresh engine for Hamilton at Interlagos, incurring a five-place grid penalty that will be applied for Sunday's grand prix.

Hamilton was boosted by his display in qualifying after finding a good set-up for his car, only for the exclusion to leave him with a mountain to climb through the rest of the weekend.

It means Verstappen will have a golden opportunity to extend his 19-point lead in the drivers' championship in Brazil, starting with the 24-lap sprint race on Saturday, which offers three points to the winner.

Verstappen will start side-by-side on the grid with Hamilton's Mercedes teammate, Valtteri Bottas, while Sergio Perez will line up third on the grid in the sister Red Bull car.

The result of the sprint race will decide the grid for Sunday's grand prix, with Hamilton dropping five places from his finishing position as a result of the engine penalty.