Christian Horner wants to avoid an “action replay” of the 2019 opening lap clash between Lewis Hamilton and Max Verstappen in Mexico as their Formula 1 title battle continues.

Mercedes stunned Red Bull by locking out the front row of the grid for Sunday’s race at the Autodromo Hermanos Rodriguez, as Valtteri Bottas headed up a 1-2 finish in Q3.

Hamilton qualified second, one place ahead of title rival Verstappen in third, leaving the Dutchman on the back foot heading into the race as he bids to build on his championship lead.

Verstappen sits 12 points clear of Hamilton in the standings with five races to go, with much of the pre-weekend narrative surrounding the possibility of another clash between the two drivers after incidents at Silverstone and Monza.

Mexico offers drivers one of the longest runs of the season to a Turn 1 braking point, meaning the slipstream afforded from not starting on pole position can be particularly powerful.

Red Bull team boss Horner said it was important to avoid getting stuck behind another car for too long due to the cooling challenges at altitude, but noted Turn 1 was somewhere that incidents could occur.

“You’ve got to be careful around here because you can’t follow for too long, because the temperatures will start to get out of control,” Horner said on Sky Sports F1 following qualifying.

“But I think the first opportunity is down into Turn 1. You’ve only got to look at the replays from 2019 here to see it can get a bit juicy down there.

“The tow is strongest obviously on that first lap. It’s going to be grandstand seats down there. We need to have a good start with both the drivers, and try and get a run.” 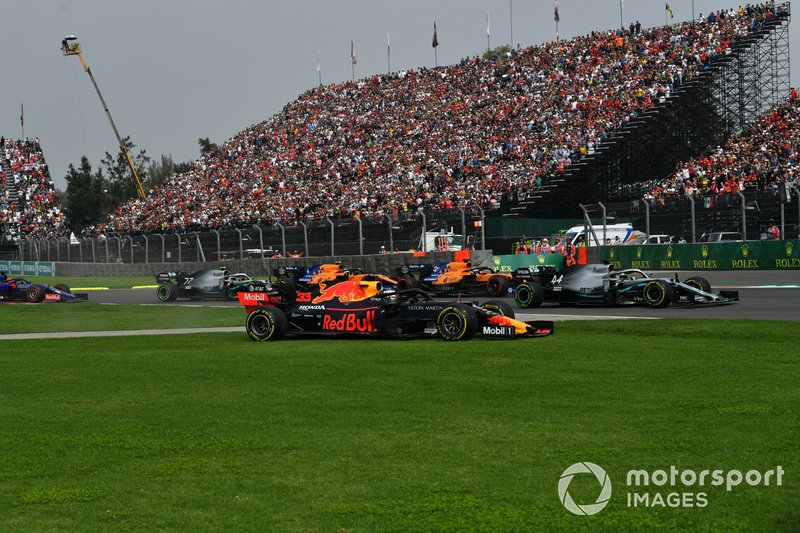 The 2019 race saw Hamilton go side-by-side with Verstappen at Turn 1 after being blocked by Sebastian Vettel from third on the grid. Verstappen squeezed Hamilton towards the exit of the corner, only for Hamilton to hold his line, giving him the inside for Turn 2. The two drivers made contact, causing both to take to the grass and lose positions.

Asked how much Verstappen would be willing to risk at Turn 1 given the title fight, Horner said: “We don’t want an action replay, if you look at 2019, Max starting third, Lewis got very aggressive into Turn 2, and then a puncture [picked up in a subsequent clash with Bottas] screwed the rest of the race.

“You’ve got to be there at the finish, and I still think we’ve got a great chance in this race. It’s certainly harder than it was looking perhaps earlier this morning.”

Horner took confidence in the fact that Verstappen was unlikely to use the soft tyre in the race, having made it through Q2 on mediums.

“We’ve looked pretty good on the medium tyre all weekend,” Horner said. “We don’t see the soft tyre again. Max was never that happy with the soft so far this weekend. The hard tyre was OK for us.

“So first thing is to nail the start and see what formation driving there is down to Turn 1.”