Yuki Tsunoda inadvertently found himself the villain in the eyes of many after qualifying for Formula 1’s Mexico City GP.

The AlphaTauri driver was deemed to have ruined the crucial final qualifying laps of both drivers from the sister Red Bull Racing team, and as such had the massed ranks of Sergio Perez and Max Verstappen fans on his case.

But what actually happened in those final moments of qualifying, and was the Japanese driver really at fault?

In fact it was an unusual set of circumstances. While it often happens at other stages of qualifying, it's rare for a driver to be on a slow in-lap right at the end of Q3, when everyone else is going flat out on what is supposed to be their fastest lap of the weekend.

And that was down to the strategy adopted by the AlphaTauri team. Tsunoda had a back of the grid power unit change penalty, and thus he went into qualifying with two targets – finish ahead of the three other drivers carrying similar penalties and thus claim 17th on the grid, and help his teammate Pierre Gasly with a tow.

As penalties have mounted up in recent races we've seen a few similar situations, but usually the towing only goes as far as Q2, because penalised drivers don't want to reach Q3 and be committed to starting on the "wrong" tyre from the back of the grid.

This time around two of the penalised guys did make it out of Q2. Lando Norris managed to do it on the favoured medium tyre and thus didn't make any compromises, but Tsunoda had to use the soft, thus committing himself to using a tyre at the start that everyone else tried hard to avoid.

The upside for his team was that Gasly would have a tow for the crucial final run in Q3, and that's what it worked towards.

The strategy meant that once he'd done his job and pulled Gasly down the straight Tsunoda would have to tour round knowing that a lot of fast cars would be coming up behind him on their final hot laps. In the event those he would have to let by were both Ferraris, both Red Bulls and both Mercedes. 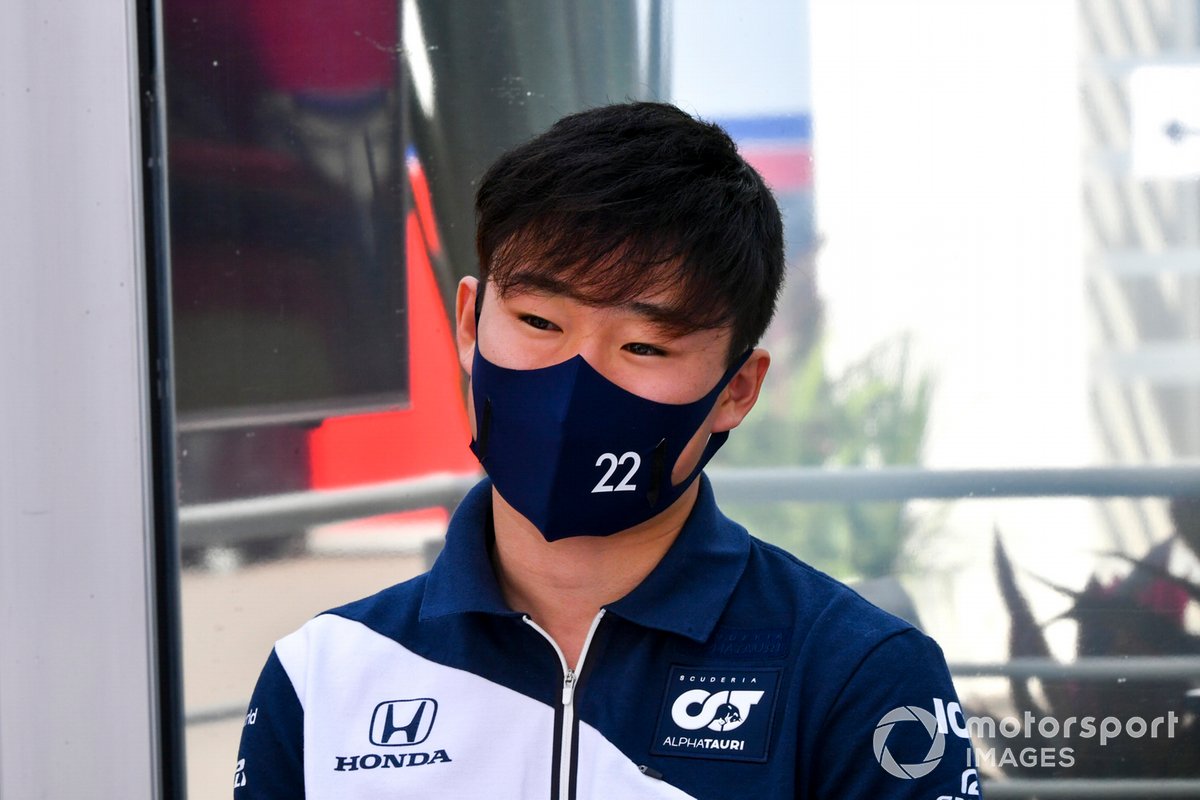 Here's a timeline of the radio traffic between Tsunoda and his engineer Mattia Spini at the end of Q3 as he approached the end of the preparation lap, and tried to make a gap between himself and Daniel Ricciardo up ahead.

Team: "Keep the position, it's good, stay there."

Tsunoda then dropped back slightly from Ricciardo as he reached the stadium section, while Gasly got into position behind, ready to get the tow.

Team: "OK, nobody pushing behind, so a nice time to open that gap. We have two seconds now. Six seconds now, we are good. Charge on and push."

Tsunoda then blasted down the straight with Gasly behind. At the end of it he jinked to the right and let the Frenchman through. He'd done what was asked, and moved aside like a pacemaker in a 1500m race.

Having slowed right down, Tsunoda then negotiated the Turn 1/2/3 complex, and headed down the straight to Turn 4. They key now was not to risk any penalty by impeding another driver.

He almost came a complete stop on the short straight that followed, so keen was he to stay well out of the way of the Ferrari driver.

That negative message was an important one – in effect it was a hurry up, Spini reminding him that he couldn't go too slowly, and had to keep up the required minimum speed for an in-lap.

Team: "And then we have Perez four behind, pushing. Pushing."

Tsunoda was now in the fast esses section, where it's all too easy to get in the way. To stay clear of Perez he briefly sped up and then drove straight onto the run-off area at Turn 10, in order to leave a clear track for the Red Bull driver. It's a standard move in such circumstances – but it threw up a massive cloud of dust.

Team: "Perez behind you. And Verstappen three behind. F***!"

It was at this point that Spini realised that Perez had gone off the road, joining Tsunoda in the run-off, and that both cars had then potentially interfered with the closely following Verstappen's lap.

After a pause Tsunoda said: "I mean I let him past really… I didn't do anything there."

Spini carried on monitoring approaching cars as his driver headed down the back straight towards the stadium.

Leclerc and Bottas swept by on the straight, and then after entering the stadium Tsunoda turned sharp left and cut across the tarmac infield, allowing Hamilton a clear run through the twisty bits. He then headed into the pits and came to a stop in the pitlane, where the radio chat continued.

Then Spini added: "So Yuki, we are in front of Norris, and Gasly P5. So very nice job."

Spini may have tried hard to maintain a positive vibe, but the proverbial had already hit the fan as replays of the incident were shown, and a fruity radio message from Verstappen was played.

Having aborted his final lap and realised that his dream of starting from pole at his home race was gone Perez said nothing until he got back to the pitlane and stopped in parc ferme. His message was short but not sweet: "Ahhhh, f***'s sake."

On seeing the two cars off the road Verstappen had lifted briefly, expecting a yellow that never came.

In fact the marshals on the corner did a great job. They understood the significance of calling for a yellow with cars on their final laps, and instead they acted like a referee waving play on, and not whistling for a foul.

Verstappen soon realised that there was no yellow, but the damage to his lap was done even before he locked up at Turn 13 in the stadium. He then had a wobble onto the pit straight. After crossing the line he said, "Ah for f*** sake, what happened there in front of me?"

"Not quite sure," replied his engineer. "Slow button on, please Max. Tsunoda just, I dunno, parked it, so Checo had to back out."

Shortly afterwards in the press conference the Dutchman expanded on how things had unfolded.

"I don't know what happened in front of me, but it must have been Yuki holding up first Checo and then both of them, of course, had to go wide," he said.

"You arrive so quick it's difficult to pinpoint what's happening. I just saw a lot of dust, so I thought a car crashed and now with the yellow flag rules, I've been caught with that already here in Mexico, I backed out of it a bit.

"And then no yellow flag came so I continued pushing, but of course that's already like two-and-a-half tenths gone. So, my lap was basically finished."

His RBR team boss Christian Horner was quick to add his view.

"I think we got Tsunoda'd," he said. "Both drivers were up on their last lap. Max was up two-and-a-half tenths, I think Checo was just under two-tenths up.

"I don't understand why he was just cruising around at that part of the circuit. It's disappointing, because it affected both of the drivers because they're both pretty annoyed."

By now the momentum was building, and Tsunoda was widely seen to be at fault, although not all of those who rushed to judgement understood that he had driven off the road to get out of the way.

When he met the media immediately after qualifying, he still wasn't sure precisely what happened. However as the potential ramifications of having upset the Red Bull management became clear he looked like a deer caught in headlights.

"I didn't mess up the Red Bulls," he said. "Just a mistake by themselves. I don't know about Max? Did I hold up Max as well?"

Shown a video clip by a team member he said: "I went outside and I couldn't do anything more than that one. I mean, I don't know, where should I go there?

"If I had another chance I'd do the same thing. I don't know what should I do? Do you think I did wrong thing?"

Perez suggested that he'd gone off because he'd lost downforce due to Tsunoda being in front.

"Yuki was just ahead," he said. "I think I was a bit too close, and I lost a bit too much already, because we go through the high speed and it's pretty difficult through there when you have a close car ahead of you. And unfortunately I lost it there."

Given that Tsunoda was running slowly would the aero impact really have been that great? Or was it more a case that he was simply distracted momentarily by the huge cloud of dust thrown up by the AlphaTauri when it motored onto the run-off, something that the Japanese driver – trying to do the right thing – could not have foreseen?

Perez was right on the ragged edge, gunning for pole at his home race, with a car that frustratingly wasn't as good as it had been a few hours earlier when he topped FP3.

He was also forced to dig even deeper to try to match the surprising pace of Mercedes in qualifying. It wouldn't have taken very much to tip him over that edge, and send him off the road.

And don't forget how unusual it is for a driver to be running slowly at the end of Q3. Perez would not have been expecting to come across a slow moving car that was actively trying to stay out of his way, and he wasn't told by his team to watch out for a slow car. Like Verstappen, he saw the dust and assumed that there had been an incident.

In the end it was moot. While Horner noted that both drivers were up on their previous times before they came across Tsunoda, they were not going fast enough to have knocked Bottas and Hamilton off the front row, as Toto Wolff pointed out.

"I think at that stage, sector one and sector two, they were behind," he said. "I think it was something like two-tenths or two-and-a-half tenths."

The bottom line was it was just one of those things, and it was significant too that there wasn't even a hint of an FIA impeding investigation. A few seconds either way and Tsunoda would have been trundling down a straight when Perez and Verstappen passed by, and it wouldn't have been an issue.

It was an unfortunate co-incidence that the cars affected were the two Red Bulls. The incident made for some tension between the AlphaTauri and RBR camps, and it was clear that Franz Tost wasn't happy that his man had taken such a verbal beating from all sides.