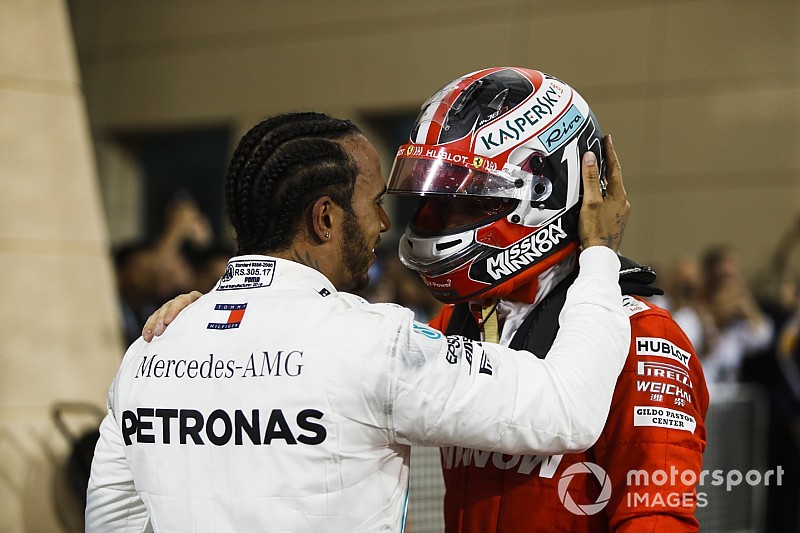 Mercedes Formula 1 driver Lewis Hamilton said it "felt weird" to pass the hobbled Ferrari of Charles Leclerc for an unlikely victory in the Bahrain Grand Prix.

Leclerc looked well on course for a maiden grand prix win as he was managing his gap over Hamilton in the closing stages of the race, only for his Ferrari to develop an MGU-H problem.

The Monegasque slowed dramatically and Hamilton made quick work of what was an initial nine-second gap.

He could be seen raising his hand as he breezed past the ailing Ferrari on lap 48, before going on to win the race.

“Ultimately you want to pass someone because you’re quicker than them and it’s been a fight,” Hamilton said afterwards.

“I went past Charles on the back straight and I raised my hand to him because there was nothing I could do, I didn’t have any problems.

“It feels weird and honestly you can’t believe your luck in that scenario but what can you do? You can’t deny yourself, you just have to keep doing what you do.

“I’ve been in positions like that before, where you’ve been in the lead and the car has stopped, so I know how it feels.”

Hamilton said Leclerc, who became F1's second-youngest ever pole-sitter on Saturday, “did incredible this weekend" and "has a bright future ahead of him”.

“It’s always good to live with the glass half-full,” Hamilton continued. “Today he still got some great points [with third place], even though he had that problem, and he was so much faster than his teammate.

“There are many positives for him to take from this, and we have a lot of work to do to keep up.”

Hamilton described his race as “up and down”, saying that he “got a terrible start once again” and that he looked to be out of contention to finish in the top two after a poor second stint.

“We [Mercedes] were very, very lucky today, to get the one-two,” he said. “Collectively we’ve done a solid job with the weekend but Ferrari outperformed us from the get-go and we’ve got to continue to work, [to find out] where we’ve gone wrong this weekend.”