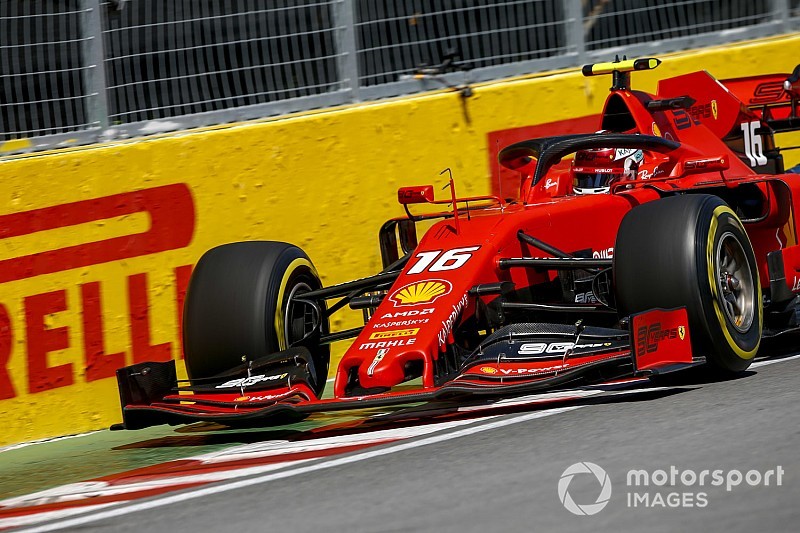 Morning pacesetter Hamilton had been quickest using medium tyres during the early runs, but when he changed to softs he lost the rear of his car mid-way through the Turn 8/9 chicane.

The Mercedes slewed sideways and smacked the wall with its right rear wheel, leaving Hamilton limping back to the pits with a puncture.

That was only part of the damage, and Hamilton missed the rest of the session as Mercedes set to work on replacing the rear end of his car.

The champion team had been nearly a second clear of its rivals in the morning, but Hamilton's teammate Valtteri Bottas was outpaced by both Ferraris in the afternoon soft tyre runs.

Ferrari had gone out earlier than Mercedes for its opening laps, with Leclerc and Sebastian Vettel swapping the top spot on mediums before the Mercedes again came through nearly a second quicker.

Bottas was using hard tyres at that point, and was within three tenths of a second of Hamilton's medium tyre pace initially before improving to just 0.142s behind.

Though the Ferraris closed to just under seven tenths away from Hamilton on mediums, the session seemed set to be a repeat of the earlier Mercedes domination.

That left a top three covered by just 0.134s and headed by two Ferraris.

Max Verstappen had used hards to get between the Mercedes and the Ferraris as the early runs finished, but his soft tyre effort was spoiled when he came upon Red Bull teammate Pierre Gasly moving slowly at the final chicane.

Verstappen understeered wide and slapped the wall. Although he managed to get back to the pits, his session was effectively over and he ended up 13th - only rejoining for a brief run at the end of the day.

With Hamilton and Verstappen sidelined, and Gasly only going fast enough for 12th, McLaren found itself in fourth place with Carlos Sainz - who lapped just 0.376s off the pace.

Kevin Magnussen put Haas into the top five in fifth, with Hamilton's medium tyre time holding up for sixth place.

Home favourite Stroll and Romain Grosjean will be investigated after the session for a late incident in which Stroll banged wheels with the Haas as he passed it into the final chicane.

Grosjean was 12 places adrift of teammate Magnussen in 17th, but a little under seven tenths of a second slower.

Antonio Giovinazzi missed almost an hour of the session while Alfa Romeo carried out a precautionary gearbox change following his practice one crash.

He took 18th place once on track, two positions behind teammate Kimi Raikkonen.