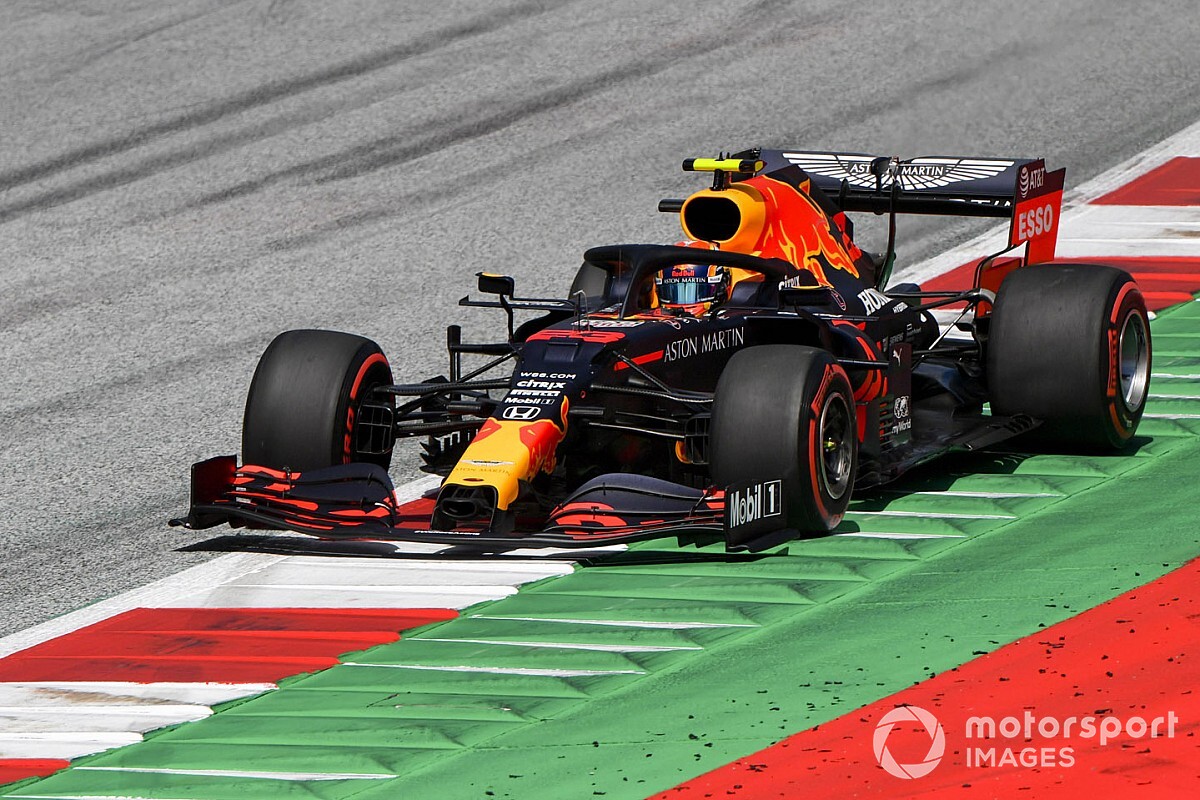 Alex Albon felt he was on-course to score his maiden Formula 1 victory in Sunday’s Austrian Grand Prix prior to the clash with Lewis Hamilton when battling for second.

Albon spent much of the race running third behind the two leading Mercedes, but was able to pit for a fresh set of soft tyres after the safety car was called for a second time with 20 laps to go.

Mercedes opted to keep both race leader Valtteri Bottas and second-placed Hamilton out on their hard tyres, which had already completed 25 laps by that point.

Albon sat third on the restart and was quick to try a move around the outside of Hamilton at Turn 4, appearing to pull clear of the Mercedes.

But contact between Hamilton’s front-left wheel and the rear-right of the Red Bull car sent Albon into a spin, dropping him to the back of the field.

Hamilton was hit with a five-second time penalty for the clash, dropping him to fourth in the final classification.

It marked the second incident between Albon and Hamilton in the closing stages of a race in three races, the pair having collided at last November’s Brazilian Grand Prix.

“I am a bit fresh right now so I have got to be careful with what I say,” Albon said after the race.

“I really felt like we could have won that race. Of course Mercedes had the outright pace today, but the guys did a great job with strategy.

“When I did the pitstop, I didn’t know where we were on track or what was going on. As soon as it all played out, it looked really strong for us.

“I knew basically that they were on the hard tyres and the first five laps [of the stint] was when I was going to do the overtakes. I was confident and the car was feeling good in the last stage of the race.”

Albon said that while the clash with Hamilton in Brazil was more of a racing incident, the blame was clearer to put on his rival this time around.

“This one, I felt like I did the move already, and I was already focussing on Bottas. It was so late, the contact.

“I think there is always a risk of overtaking on the outside, but I gave it as much space as I really could.

“I was right on the edge and I knew as long as I gave all the space I could give to him it is up to him if he wants to crash or not.”

Asked if he would go and speak to Hamilton, Albon replied: “I’ll cool off and I’ll come back.”

Hamilton had fought back from fifth to second after receiving a three-place grid penalty just one hour before the start of the race, making the Albon clash a final twist on a difficult day.

“It has not been a great weekend for me,” Hamilton said.

“I think yesterday was entirely my fault, it was a bit odd today in the preparation to all of a sudden get a penalty but it is what it is and it didn’t destabilise me.

“It just encouraged me to go out there and try to drive as best as I could. I feel like I did and obviously I had great pace to catch up with Valtteri.

“It was a really unfortunate scenario with Alex. I can’t believe we have come together again, but it really felt like a racing incident.

“But either way, I’ll take whatever penalty they feel I deserve and move forwards.”