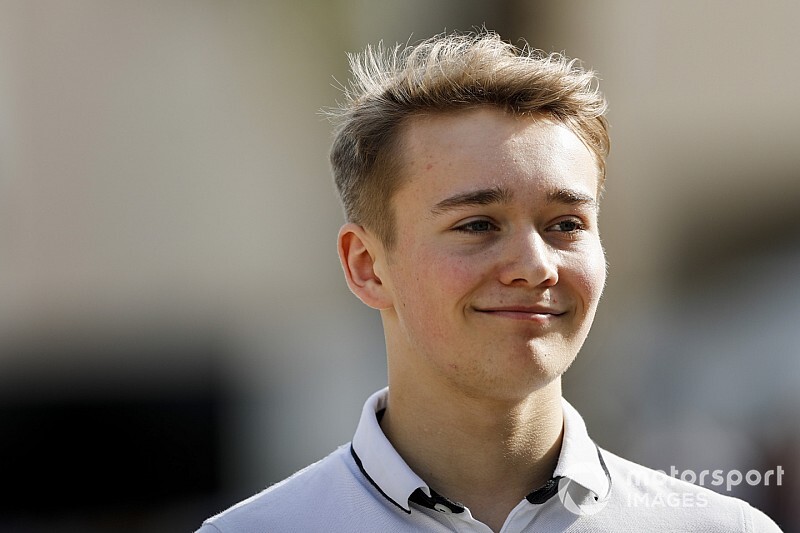 Billy Monger took a sensation victory in an extraordinary Pau Grand Prix, gambling on wet tyres and taking his first single-seater win in the process.

The teenager, who races using a specially-adapted car run by Carlin as a result of being a double amputee below both knees, had qualified 11th but peeled into the pits at the end of the warm-up lap to switch from slick to wet tyres after rain started to fall on the grid.

As the Briton made his way up the order, the dominant Motopark team fought over the top four positions, led by surprise poleman Julian Hanses. He held on to the lead for 14 laps, until Red Bull-backed team-mate Liam Lawson made a disastrous move on the German through the twisty Turn 10/11 sweep that took them both out.

Although Lawson – who qualified fourth after winning the first race of the weekend – was faster than his teamates, Motopark’s choice to keep its drivers on slick tyres meant Monger was rapidly closing on them. He was just a second behind when the clash between Hanses and Lawson took place, and after holding off Carlin team-mate Nicolai Kaergaard on a safety car restart to clear the crashed cars, the Briton pulled away up front to win by 1.121 seconds.

“I just tried to pick them off one by one,” said Monger. “I just didn’t believe two years ago that I’d be winning races. I can’t believe it – I was dead last after the first lap when I pitted. Me and my engineer were fighting over the radio, he was saying we stay slicks. It was so slippery I came in [for wets] and it was the right call.”

Lawson’s fellow Red Bull junior and Motopark team-mate Yuki Tsunoda switched to wets after his teammates clashed, having already been overtaken by Monger, and used his fresh rubber advantage to close onto the back of the top two as the race ended.

Fortec Motorsports’ Cameron Das was the only driver who stayed on slicks throughout the race, and was holding station in the top five after an impressive first lap where he overtook several cars. As the rain increased he was powerless to halt his slide down the order, and ended up dropping to eighth behind Carlin’s Christian Hahn and Teppei Natori and the fourth Motopark car of Marino Sato.