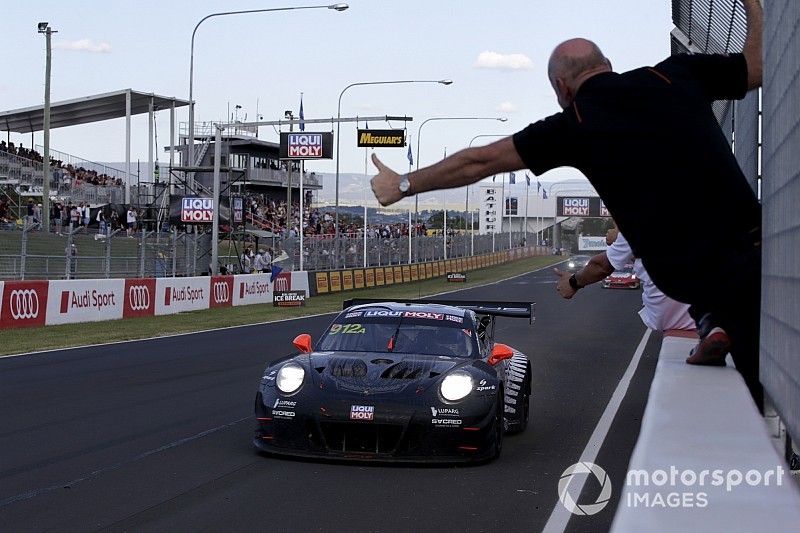 The #912 EBM Porsche is officially the winner of the 2019 Bathurst 12 Hour, with a post-race investigation clearing Matt Campbell of any infringement while passing Chaz Mostert.

The two Aussies clashed at The Chase with half an hour to go, Campbell giving Mostert's Schnitzer BMW a nudge on the way into the left-hand part of the corner having slipstreamed it through the fast right hander.

The move put Campbell into third, and was crucial in giving him a shot of running down leader Jake Dennis to win the race.

While stewards confirmed a post-race investigation would take place, it's since been determined that the move was legal, and Campbell's win alongside Dirk Werner and Dennis Olsen stands.

Speaking after the race Campbell told Motorsport.com he had no concerns over the legality of the move, and that he felt Mostert was moving under brakes.

"When I saw the opportunity I had to take it," he said.

"If I was behind him any longer I think it would have hurt our tyre, and the engine was getting quite hot. It was then and there.

"We got it down there, he was moving a bit under brakes and there was a bit of contact. But at the end of the day we got the move done and we trucked on up the road.

"I tried two other moves and he moved under brakes, and also on that move he moved over on the brakes as well. [There was] a little bit of contact, but I was far enough down the inside and he turned in on me."

Campbell added that the win is a career highlight. particularly after a second in 2017 and a fourth in 2018.

"I've done this race six times and been so close the last two years with Porsche. To finally get the victory, the last time with [the 911 GT3 R], it's just phenomenal.

"It's such a highlight of my career."