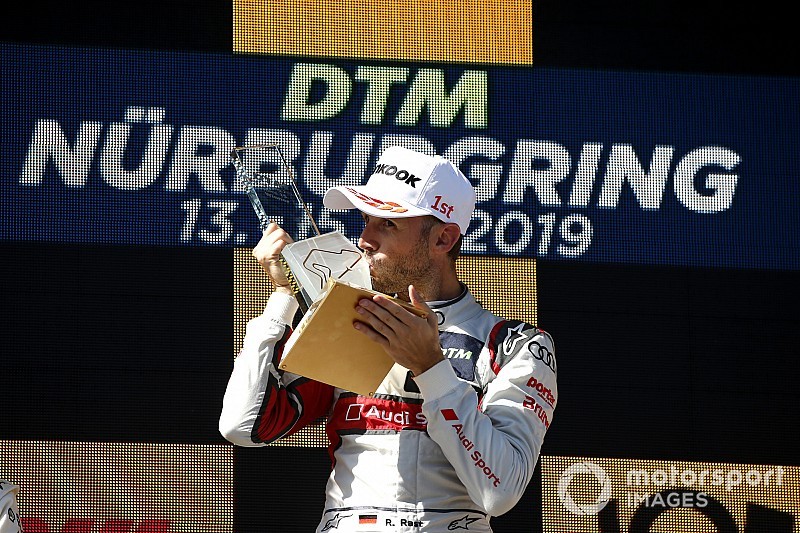 Rene Rast won his sixth race of the 2019 DTM season at the Nurburgring while Audi teammate Nico Muller conceded significant ground in the title fight after a nightmare showing.

Muller had looked set to challenge polesitter Rast off the line, having squeezed past BMW's Bruno Spengler for second, until it became apparent the Swiss driver had jumped the start.

He took his subsequent drive-through penalty at the end of the third lap of 41, and Muller swiftly returned to the pits for his mandatory pitstop three laps later, taking the gamble of a safety car to shake up the order.

But a safety car never materialised and Muller struggled to make up ground until the pitstop window, making his way up to the fringes of the top 10 before his aged tyres began to drop off.

He was embroiled in a late battle with R-Motorsport Aston Martin driver Paul di Resta, forcing the 2010 DTM champion onto the grass at the exit of the Turn 5 hairpin as di Resta smashed through an advertising board and continued.

Muller was shown a black-and-white flag for the offence and then slipped to 16th at the flag - the last of the classified runners - as Rast cruised to victory unchallenged to extend his championship advantage over Muller to a comfortable 47 points.

Rast ran with fellow Audi driver Mike Rockenfeller in close support for the majority of the race and Rast was able to build a gap of over 15s before Rockenfeller slowed on track and pulled into the pits to retire with an oil leak.

Rockenfeller's late retirement boosted two BMWs onto the podium, with Spengler running a lonely race to second, while Marco Wittmann kept his increasingly slim title hopes alive by finishing third after charging from 11th on the grid.

After climbing to seventh on the first lap, Wittmann's RMG BMW team called the strategy perfectly for him to rejoin the track in a train of cars battling for fourth.

While he came out ahead of Spengler, Wittmann ran wide midway through the Mercedes Arena bend on his out-lap to allow Spengler into a net second.

Wittmann then spent several laps behind the Audi of Jamie Green before finally managing to narrowly scrape ahead on the exit of the Turn 1 right-hander to claim third.

Duval was shown a black-and-white flag for forcing Sheldon van der Linde's BMW wide on his way to fifth, with the South African finishing seventh.

BMW stablemates Joel Eriksson and Timo Glock were eighth and ninth, while Robin Frijns completed the scorers in 10th for Audi. Daniel Juncadella was the highest-placed Aston Martin driver in 11th.