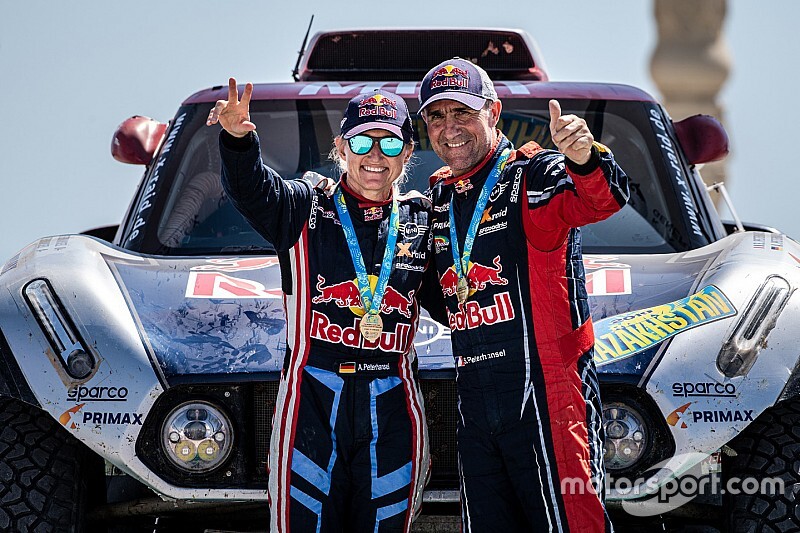 Stephane Peterhansel will not contest next month's Dakar Rally with his wife Andrea as his co-driver after the German was forced to drop out with health issues.

Peterhansel won this year's FIA World Cup for Cross-Country Rallies with Andrea alongside him, the husband-and-wife duo claiming victory in April's Abu Dhabi Desert Challenge before taking further podiums in Kazakhstan and Morocco.

However, Andrea - a former top-five Dakar finisher in her own right - did not take part in last month's Riyadh Rally in Saudi Arabia after failing an unspecified medical check.

Now Peterhansel's X-raid Mini team has revealed that she has not been cleared by doctors to take part in the Dakar, which begins in Jeddah on January 5.

Her place will be taken by the Portuguese navigator Paulo Fiuza, who helped Peterhansel to a second-place finish in Riyadh.

"We tried and hoped until almost the last minute, but unfortunately Andrea cannot compete in the 2020 Dakar," commented X-raid team boss Sven Quandt.

"She and Stephane had a great season and could certainly have been among the front runners in Saudi Arabia, but health comes first.

"But we're also sure that Paulo will do a very good job. He and Stephane worked well together at the Riyadh Rally."

The sister factory Mini JCW Buggy will be driven by Carlos Sainz Sr, who is aiming for a third Dakar triumph in his second outing with the X-raid team.

Sainz: Mini buggy is ready to take fight to Toyota