A fundraising page has been set up to help pay for the damage caused by a devastating blaze during last weekend's Snetterton British GT weekend, which affected the Alastair Rushforth Motorsport Ginetta team.

By:
Stefan Mackley
Listen to this article

The paddock incident occurred on Saturday at the British GT meeting shortly after 3pm, which halted track proceedings for more than two hours as first marshals and circuit officials battled the blaze before three fire engines attended the scene at the team's awning.

In the wake of the incident, which destroyed the truck, set-up equipment and awning as well as other items, a fundraising page has been set up to help pay for the damage which so far has reached more than £1000.

The team was offered alternative awning space which allowed drivers Connor Grady and Will Orton the chance to compete in all three Ginetta GT Academy races on Sunday.

“I’m one of the smallest teams and it’s my livelihood, this is my job and that [truck] was my mode of transport. I don’t know what I’m going to do yet [for the future], but we will be at Croft [September 18-19] with two cars.” 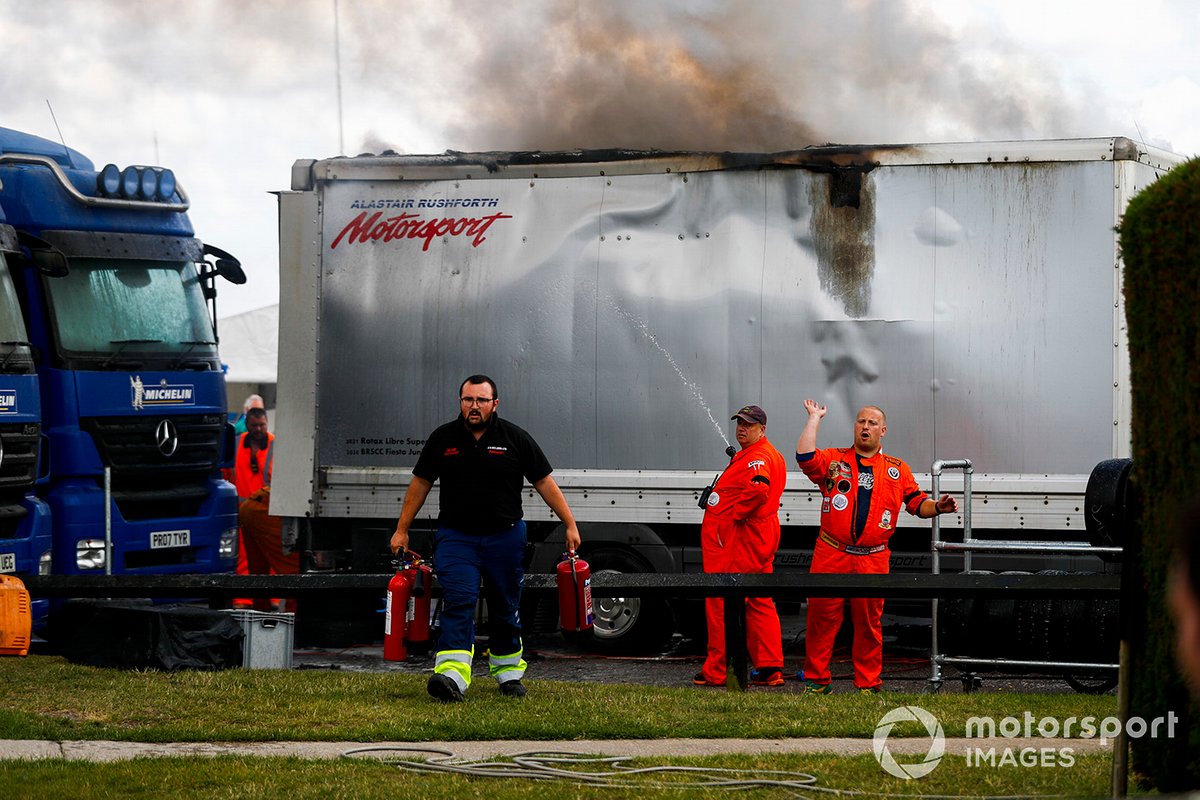 Fire in the paddock

Rushforth, who has been running his Alastair Rushforth Motorsport team since 2019 in Ginetta Junior and for the first time this year in GT5, believes a battery charger might have been the cause of the blaze which took place in his truck that was also his accommodation.

Talking about what happened, Rushforth commented: “As I came out of the garage I noticed a lot of people running and I assumed it was a race that had finished.

“But when you got beyond the trucks you could see the smoke and realised something is going on, and then you realise where you are and that it’s coming close to where I was [set up] so you start walking a bit quicker.”

Rushforth was given a hotel room by Raceway Motorsport amongst other offers and Ginetta bought him new clothes.

“It’s people’s support that’s added to the emotion,” he added. “The offers of support have been amazing and I can’t thank the circuit, marshals and fire brigade enough.”

A fundraising page has been set up to help pay for the damage caused by a devastating blaze during last weekend's Snetterton British GT weekend, which affected the Alastair Rushforth Motorsport Ginetta team.

A Snetterton paddock fire caused the Ginetta GT Academy race to be red-flagged and the British GT qualifying session to be delayed.

How a BTCC veteran conquered the summit in British GT

After two decades in touring cars, Rob Collard had an uphill battle to unlearn the tools needed to be quick in tin-tops and understand how to hustle a GT3 car. But he did so with aplomb to prevail alongside Sandy Mitchell amid a challenging year for the series...

Jenson Button says he would do more testing if he were to return to GT3 racing in future after a tough debut weekend in the British GT championship at Silverstone last weekend.