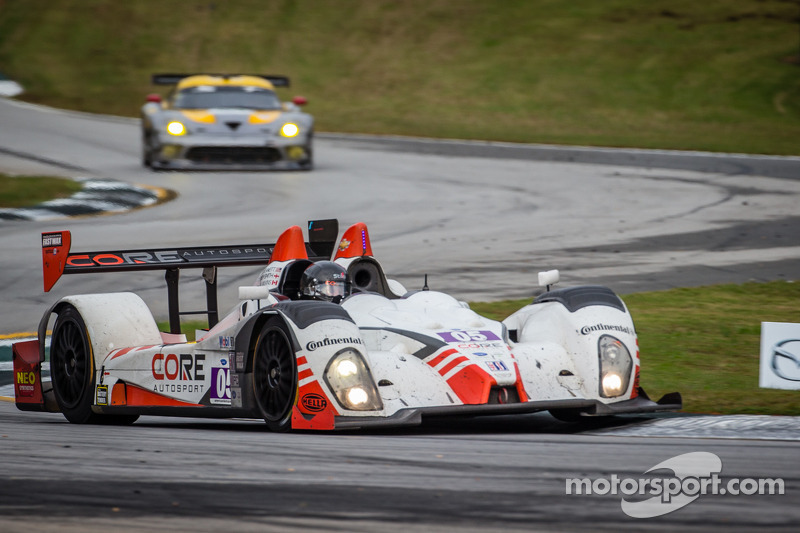 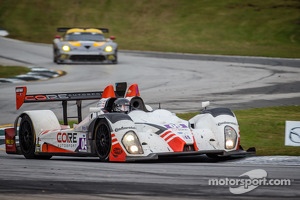 CORE faced a demanding day at Road Atlanta courtesy of rapidly changing weather conditions. Rain clouds moved over the 2.54-mile, 12-turn circuit just as the 34-car field prepared to leave the starting grid. Rain would come and go throughout the first half of the 1,000-mile race, forcing CORE to pit both the No. 05 ORECA FLM09 and No. 06 Porsche 911 GT3 RSR numerous times for tire changes.

The No. 05 emerged from the rain four laps down to the No. 8 BAR1 Motorsports car and No. 25 8Star Motorsports car. Quick pit work and strong drives from Jon Bennett, Mark Wilkins and Tom Kimber-Smith helped the team gain a lap back and cross the finish line in third after more than nine hours of racing.

Though the team stood on the third step of the podium, CORE was officially awarded second-place points in lieu of 8Star Motorsports, which is not a full season entrant and by ALMS rules, cannot collect points. As a result, CORE edged BAR1 Motorsports by three points for the PC title.

The 2013 ALMS PC Team Championship is the third title for CORE in as many years. Bennett, team founder and owner, ended the season third in the PC Drivers’ Championship.

The early race tire-changing chaos also put the Porsche squad several laps down and in catch-up mode. Colin Braun, Michael Christensen and Patrick Long showed the No. 06 was capable of running with the leaders, but ill-timed yellows hampered the trio’s forward progress. Long crossed the finish line in eighth.

CORE autosport will celebrate its third-straight PC Championship at the ALMS Night of Champions banquet on Sunday evening. Photos, video and news from the team’s championship season is available at www.coreautosport.com.

Jon Bennett Driver: No. 05 ORECA FLM09 PC "At the start, it was my goal to not get caught up in too many racy situations right off the bat, since it was such a long race. It was important to stay clean in those opening laps. I wanted to let the race settle down and then get down to business.

"In my second stint it was difficult because it was in between wet and dry and nobody really knew what the proper tire was, including myself. After it stopped raining and dried out, the car was really well behaved, but we had fallen behind and I had some difficulty with the pit speed limiter switch in the car and that caused me to get some pit lane speeding violations. But the team kept digging and positioned us where we needed to be to make it three PC titles in-a-row."

Tom Kimber-Smith Driver: No. 05 ORECA FLM09 PC "The changing conditions weren’t very fun, but everyone was in the same boat trying to figure out which tires to be on. Morgan Brady made some great calls and I was able to make up some ground to the leaders. It wasn’t very enjoyable driving in those conditions though, because the track was just grey and you can’t distinguish and color changes. You don’t know if you’re on a dry bit or a wet bit. It was pure experimenting. We played it safe and that seemed to pay off.

"I think the fact that CORE’s third PC championship came down to the wire shows how hard the PC category was this year. I think a lot of teams are looking at it for next year. You’ve got solid drivers in an almost one-make series, so it comes down the work of the teams. CORE is an extremely professional team and to have them neck-and-neck with two other young teams for the championship this week is a credit to the strength of the class and to CORE."

Mark Wilkins Driver: No. 05 ORECA FLM09 PC "We had some adversity with the weather today and throughout the week, which limited our track time, but Morgan Brady did a great job with the setup and the car felt really good.

"For my stint, I had to work hard and focus on gaining time back. I had a lot of fun out there and Tom and Jon did great jobs in their stints.

"It’s special to be a part of the final ALMS race and Petit Le Mans. This track’s been fairly good to me and I’ve had good success in ALMS. I really enjoy the cars too. The PC category is really fun to drive in. Next year’s going to be even better. It’ll be a new era and I think the fans have a fantastic opportunity to see everything come together in an amazing sports car series.

"I really enjoy working with CORE. They are very professional and I’m honored I was able to help them win their third championship in-a-row." 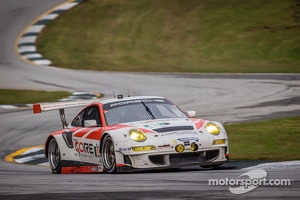 "We lacked a little bit of pace today, but I was able to race with some of the leaders in my second and third stint. I struggled in first stint with the changing weather conditions and trying to find the right tire.

"Hats off to the team on their performance today. We were strong in the pits and stayed out of trouble on track, but some days just don’t go your way." Michael Christensen Driver: No. 06 Porsche 911 GT3 RSR "It was a great experience to be with CORE autosport, Patrick and Colin. We would have liked to be faster, but that’s racing. I think we all did the best we could.

"The competition level is very high in ALMS. Some of the highest level of drivers in the world race in the GT category in this championship. You can’t make any mistakes in this class. It was difficult. I’ve raced with this many cars and classes before, but this is my first time racing on such a small track. It’s quite narrow here. There were many places with only room for only one car.

"CORE has impressed me a lot this weekend and I very much enjoyed working with them."

Patrick Long Driver: No. 06 Porsche 911 GT3 RSR "The mixed bag of wet and dry was really challenging today. I feel like I came in the pits about 11 times. That was actually a lot of fun though, because it made the time in the car go by quicker.

"I had some close calls in the night stint. At one point, a prototype came flying back on the track after going off and I got pickup on my tires avoiding it. Then I was right in the middle of the GT battle and I ended up getting into the No. 3 Corvette. I cringe knowing they were going for a championship. It wasn’t intentional.

"Overall, it was possible to try and fight for position for a few laps, but not over a long stint. We tried a lot of different tire compounds and combinations, but in the end it wasn’t our day.

"If you would have told me at the beginning of the year that we were going take two podiums in this day and age of GT competition coming in mid-season, I would have taken those results any day. We have to be proud of what we accomplished. There were some hard days at the office, this being one of them, but we progressed quicker than I could have imagined and it was great to be a part of it."