An Inside Perspective with Genoa Racing Crew Chief Steve Ragan

The position of crew chief can be a daunting role within the motorsports community. The mechanics of keeping a sports car crew in constant motion; working together for a common goal--yet managing individual responsibility is no easy task.

Maintaining one car to perfection in one series is intimidating enough-but add another car and another continent to the equation, and it can prove to be a true test of ability and stamina.

Genoa Racing Crew Chief Steve Ragan does just that--and has a crew and two cars that are just a few points out of the Championship titles on two continents to boot.

Working from a small race shop in Zionsville, Indiana, Ragan has done what some might consider impossible, with a strict attention to detail and a style that considers "small" to be an ideal component to achieving racing perfection. 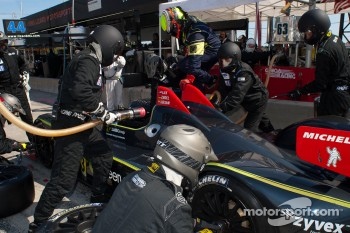 Q: What are your thoughts on Genoa Racing being called "The Little Team that Could"

A: I've been with big teams and little teams throughout my career, starting with motorcycles and now working my way into sports cars. Now, I'm back with a smaller team again. The biggest thing we look to do as a little team is ensure we have the right people, as we do with Genoa. You don't waste half of your day, because there are so many people that aren't necessarily working together. With a big team, you might sit in a meeting half of the day. And while you might come away stronger for it, it's not always the most efficient way to get things done. Here, Thomas, Kevin and I handle similar responsibilities as a small group.

Q: How do you know you've found the right fit for your team in terms of personnel?

A: You don't really know until you work with someone. But we have been around the business long enough that we have an idea of who they are from their history and track record--literally. When I'm at the racetrack, I'm focused on what I'm there to do, but I'm also watching other people. That way if we need someone, I have a mental database of candidates that I've singled out. But spending time working with them is the only way to be sure.

Q: Is there any particular skill that lends itself to success as an ALMS mechanic?

A: There are so many, but especially attention to detail. And keeping it simple is important, especially with these cars.

Q: How do the LMPC cars compare to what you've worked on in the past?

A: They're good cars, and actually quite simple. They're well built cars too. Being a spec class, there are things that are maintained for us--like the gearbox. That means we can get by with a smaller group of people. The technology is however, definitely there in these LMPC cars. But the bottom line is, no matter what I'm working on, I approach it the same way. I would approach working on an F1 car just like I do on this spec LMPC car. Your work ethic has to always be the same.

Q: Do you enjoy the spec nature of the LMPC class?

A: I enjoy it a lot because Genoa came into the class when it was new. It was, and still is, a challenge as a mechanic to come into a new series with a new car. There are a lot of unknowns--especially running the longest, most important race at Sebring at the beginning of the year, and having the right people and good fortune to win it.

Q: How do you balance the needs of the professional driver and the gentleman driver in the LMPC class?

A: It's a difficult question. You obviously have to different levels of experience. But even if you have two professionals or two amateurs, there is always going to be a compromise. Nine times out of ten, they are both going to be a little bit uncomfortable. In terms of car setup, it tends to favor the professional driver because he has a better feel for what the car needs to go fast. But you have to keep your gentleman driver comfortable. It makes it fun and challenging. And it's very unique to sports car racing.

Q: How does Genoa handle the increasing emphasis of technology in motorsports?

A: Genoa Racing's approach is more hands on. We have some guys who have experience with technology and data analysis, but we don't use it to the extreme. Again, it's a part of being a small team. We've proven to a lot of people in the series that you can be up front without relying completely on expensive technology.

Q: How is a little team from Zionsville, Indiana so competitive not just in the ALMS, but in Europe as well?

A: It's been fun. It's funny because the rules are made, and the cars are spec, but there are differences between the ALMS rules and those in Europe. As a team we have had to adjust to that. It's a lot of work trying to make sure that the car in Europe and the car in the States are both taken care of. And European tracks are different from those in the United States. American tracks, especially Sebring, tend to be rough and bumpy. That's why you see Audi and Peugeot coming here to test their cars. In Europe, the tracks are a lot smoother. But we still approach the job the same way.

Q: Sebring saw Genoa make two rapid repair jobs in order to stay in contention. How do you prepare for moments like those?

A: When you have small team with good people, you usually have a solid outcome. As a mechanic, you have to orchestrate your crew. You have to see the whole picture of what needs to be done, and make sure that everyone is working as efficiently as possible to accomplish that. And all of this has to be done quickly, but you must take enough time so you don't overlook anything. It's a very fine balance. Things are happening fast. But if you have the right people in place, the job is that much easier.

Q: Would you say that it's the people at Genoa that are the reason for your success?

A: I would say yes. I've known Genoa Racing for quite a long time, and I've known Thomas, and he's always had good people. I'm very happy to be a part of it. I think a lot of people would be surprised, when they came into our shop and saw how few people we have, just how successful we've been able to be.

Ragan's next move is to regain the points lead in the LMPC division at Mid-Ohio Sports Car Course this weekend, and continue their amazing streak of a podium finish at every ALMS event this season to date.