Hyundai's Norbert Michelisz stole a march on his World Touring Car Cup title rivals by claiming both qualifying pole positions ahead of the final round of the season at Sepang.

While Michelisz scored the maximum 10 points on offer across the two qualifying sessions, his nearest rival Esteban Guerrieri was the only one of the remaining three contenders to score on Friday after he was second fastest in second qualifying.

Cyan Racing Lynk & Co drivers Yvan Muller and Thed Bjork fared worse, and will both start all three races outside the top 10.

Michelisz was fastest in four of Friday's six timed sessions, finishing second in the other two, and claimed pole for the opening race by 0.380 seconds from the Comtoyou Cupra of Aurelien Panis - who recorded his best qualifying result to date in WTCR.

Nestor Girolami, Mikel Azcona (PWR Cupra) and the Comtoyou Audi of Frederic Vervisch will start the opener from third, fourth and fifth respectively, ahead of the BRC Hyundais of Augusto Farfus and Gabriele Tarquini.

Michelisz was again the form man come second qualifying, held under floodlights, and though he was beaten in the opening segment by teammate Nicky Catsburg, he would go on to seal his second pole - and fourth of the season - by a huge 0.784 seconds.

He now leads Guerrieri by 15 points, with 75 on offer in the remaining three races. 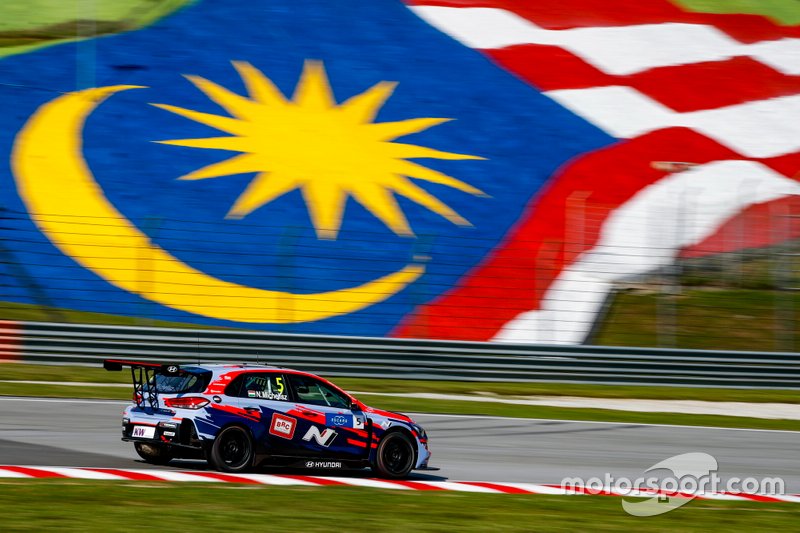 Guerrieri, who will start race one ninth, gave himself a fighting chance in the title race, as he will start both the reversed-grid second race and the season finale alongside his main rival.

The Munnich Motorsport Honda Civic Type R driver ran last in the Q3 shoot-out session, and was afforded the chance to clinch second thanks to scruffy laps from Michelisz's stablemates Catsburg and Tarquini.

That also opened the door for standout 2019 rookie Azcona to claim third, with Catsburg - who qualified seventh for the opening race but later received a five-place grid penalty for a full-course yellow infringement - due to start ahead of Tarquini.

Augusto Farfus was fastest of those eliminated in the second part of qualifying in the fourth BRC Racing Hyundai i30 N, ahead of the leading Team Mulsanne Alfa Romeo Giulietta Veloce of Kevin Ceccon.

Muller recorded the best result for the quarter of Lynk & Cos by qualifying 13th for both the second and third races.

The four-time world champion missed the cut for the second part of second qualifying by 0.078s.

He trails Michelisz by 21 points, while Bjork - who was 28th fastest of 30 cars in first qualifying, then 19th in the second session, is a further 17 behind.