Tiago Monteiro took advantage of the two Russian races to test a variety of technical solutions for the upcoming rounds.

The two races of the FIA World Touring Car Championship held on the Moscow Raceway today saw Tiago Monteiro gain a total of 21 positions over the course of both events. Starting last on the grid, the Honda Civic #18 driver crossed the finish line in 13th and 12th places respectively. 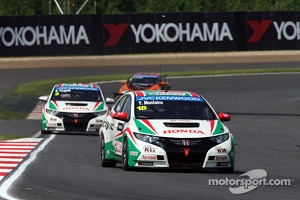 Following the water pump problem that prevented him from taking part in qualifying on Saturday and the engine change performed on his Honda Civic, Tiago Monteiro took advantage of the two Russian races to test a variety of technical solutions for the upcoming rounds.

"We used two different set-ups for the two races," Tiago explained. "I knew it would be almost impossible to get into the points, and it was even more obvious when it became clear that rain would not reshuffle the cards.

Therefore I tested different settings that we have not had time to experiment with previously. Some are better than others but the most important thing is the amount of information we have been able to collect for the rest of the championship."

The next round of the FIA World Touring Car Championship, WTCC, will have significant meaning for Tiago Monteiro as it will take place on the Boavista circuit, in his hometown of Porto.

"I really want to put on a great show for my fans. I hope we can put the technical gremlins that hampered us this weekend behind us and that we will be able to combine good results with a good quality show," Tiago concluded.

Portugal will host the next round of the FIA WTCC on June 29th and 30th.