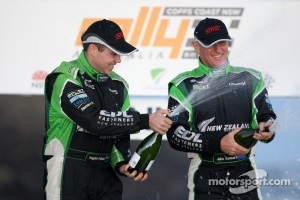 With Hayden Paddon crowned Production Car world champion on the previous event in Australia, the focus on the penultimate round in Spain will be on who can clinch the coveted runner-up spot.

Martin Semerad (above) occupies the position but with a slender advantage over the chasing pack, the battle for second place remains wide open.

Valeriy Gorban, in third, is 12 points behind Semerad with Michal Kosciuszko and Patrik Flodin three and four points further back respectively. Benito Guerra is also in contention, 18 points adrift of Semerad.

Semerad, from Czech Republic, is an asphalt specialist, although Gorban’s rally career in his native Ukraine began on sealed surface events. Both are set to challenge for victory in Spain.

Kosciuszko’s form has steadily improved throughout the season and the Polish driver will be determined to threaten the podium in his Ralliart Italy-prepared Mitsubishi Lancer Evolution X.

Flodin began 2011 as the PWRC title favourite. Instead the Swede has endured a frustrating campaign in his Uspenskiy Rally Tecnica Subaru Impreza. However, he has vowed to hit back on the season-closing rounds in Spain and Great Britain. “We’ve had a difficult season and the goal now is to finish the last rounds with flying colours,” said Flodin.

Paddon also wants to round out the season on a high note and insists he won’t be holding back in Spain, where he will compete for the first time this week.

“We will try and win, but there are plenty of unknowns around what our fellow production category competitors are like on Tarmac,” said the New Zealander. “This is the only Tarmac event on the PWRC calendar this year, and along with the usual quick contenders like Flodin, Semerad and Michal Kosciuszko, there are some fast Spanish drivers. However, our pace was good on Tarmac in France and Germany last year so we will push hard to improve on that.”

Like Paddon, Harry Hunt also arrives in Spain with a title secured after he clinched the Production Car Cup for Drivers of 2WD Cars crown in Australia. While it’s been hard to measure the Briton’s true pace due to the absence of regular competition, Hunt has impressed throughout the season in his Citroen DS3 R3T and scored overall PWRC points in Australia. With two events remaining the 23-year-old has vowed to complete his campaign with a pair of strong finishes.

There will be a new addition to the PWRC ranks in Spain with local driver Carles Llinas taking over Anders Grondal’s registration. Llinas will pilot a Mitsubishi Lancer Evolution IX, one of five drivers in the older-generation Lancer bidding for PWRC honours in Spain.

Majed and I have a few surprises up our sleeves for the year’s final two PWRC fixtures - we need to take advantage on roads and stages we are familiar with,” said Al Jabri, who has previous experience of the final rallies from his stint in the Fiesta SportTrophy International. 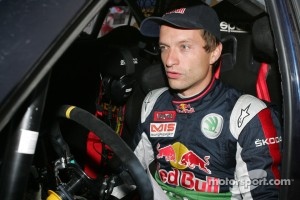 Juho Hanninen and Ott Tanak will take part in a winner-takes-all battle for the Super 2000 World Rally Championship crown in Spain this week with both drivers vowing to fight hard for victory on the mixed surface event.

“Our main task is to get to the finish ahead of Tanak,” said Finn Hanninen, 30. “This rally will be a tough one because I have never done the gravel stages in Spain before, only the recce. We are working hard to be prepared and the Tarmac stages on days two and three should be okay for us. We need more luck than we had in France but the good thing is the title is in my hands because I know what I have to do to be champion. I have to win and I will push hard.”

“For sure it will be a big battle in Spain,” said the 24-year-old from Estonia. “It’s very close but anyway we need to go there and fight for everything. There is nothing else we can do. Spain will be a new event for me so that will be difficult, but I am going there to do my best and I really want to win. We still have a lot to learn on asphalt but it is getting better all the time but I know it will be difficult.”

Czech Martin Prokop can also become SWRC champion in Spain but would need both Hanninen and Tanak to falter. Prokop, who like Tanak drives a Fiesta S2000, is 17 points behind Hanninen, 14 shy of Tanak.

“It is going to be very difficult for me to win the championship now,” said Prokop. “There is a small chance I could still win but something would need to happen to both Ott and Juho, and I don’t think that is very likely as they’ve been really strong on the last few rallies. For sure I will try my best and will push from the start, I have nothing to lose.”

Other drivers in action in Spain include Qatari Nasser Al-Attiyah, Portugal’s Bernardo Sousa, Andorran Albert Llovera and Irishman Craig Breen, who has taken over Eyvind Brynildsen’s PS Engineering registration and will drive a Fiesta S2000.

“I have taken part in some recent international events in my Fiesta S2000, both on asphalt and gravel, with good results on each,” said Breen, a frontrunner in the WRC Academy Cup this season. “I hope to show some good speed to try and compare my pace with the SWRC regulars. It’s going to be a tough weekend.”

Hermann Gassner Jr is back in action following his sizable crash last time out in France. But with regular co-driver Katharina Wuestenhagen still recovering from her injuries, Timo Gottschalk will navigate the young German in his Skoda.

Hungarian Frigyes Turan had been set to take part in his Fiesta but will be a non-starter due to medical reasons.