LMP2 cars maintained their grip on the overall timesheets in the third session of the FIA World Endurance Championship's Prologue pre-season test at Spa, with G-Drive Racing leading the way on Tuesday morning.

Mercedes Formula E star Nyck de Vries was at the wheel of the #26 Aurus-branded Oreca 07 during the early part of the session when he set the car's best laptime of 2m04.168s.

That was some way clear of the Monday benchmark of 2m04.822s set by United Autosports man Filipe Albuquerque.

The United Oreca, fastest in both Monday sessions, was second-fastest on Tuesday morning thanks to a 2m04.284s from Albuquerque, while the #38 JOTA machine was third-fastest on a 2m04.582s set by Anthony Davidson.

Toyota was fourth overall as it narrowed the gap to the quickest LMP2s to a little over half a second with the quicker of its pair of new GR010 Hybrid Le Mans Hypercars, the #7 machine.

Jose Maria Lopez left it until the final 15 minutes of the three-hour session to post his best time of 2m04.708s, after the #7 car had spent most of Monday in the garage with what the Japanese manufacturer described as "hydraulic and electrical issues".

The sister #8 Toyota was second among the Hypercars and sixth overall with Brendon Hartley posting a best time of 2m04.798s early on.

As was the case on Monday, the Toyotas were losing time to the lighter, more nimble LMP2 cars in Spa's twisty middle sector, while routinely setting outright bests in the first and third sectors. 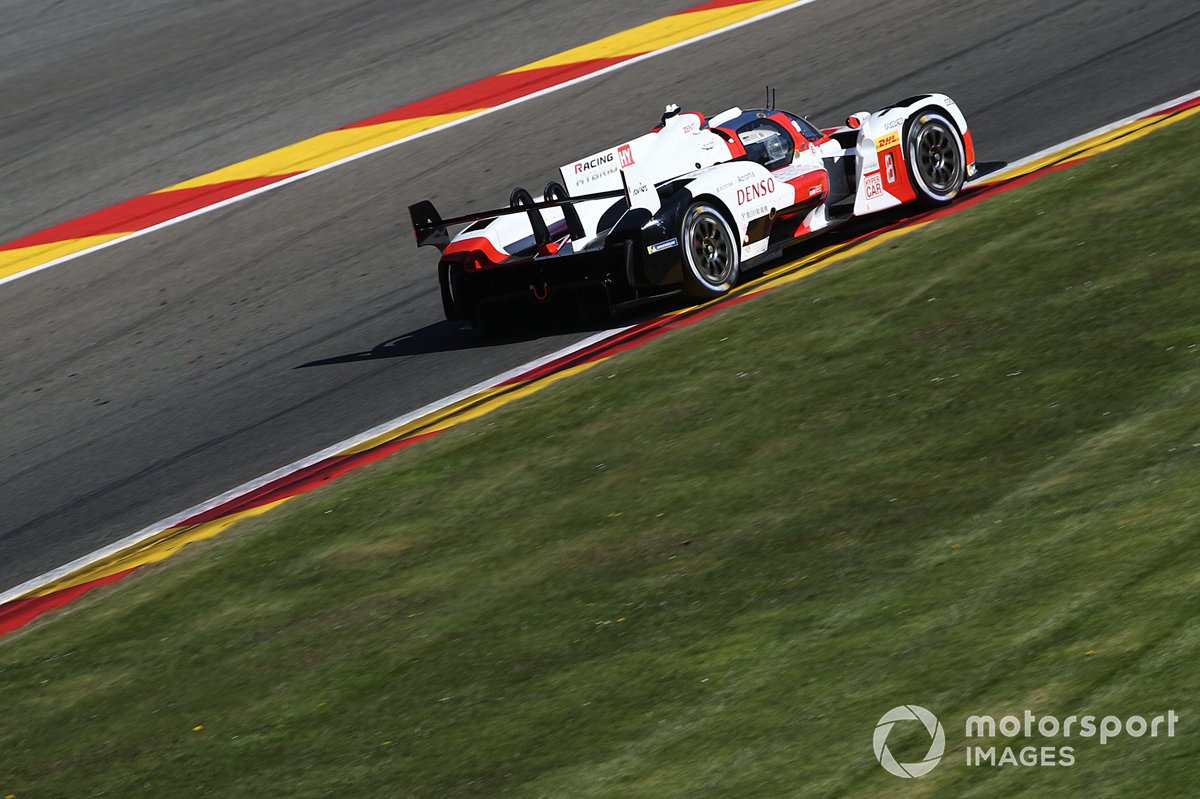 Splitting the two GR010 Hybrids on the overall leaderboard was the Racing Team Nederland Oreca, which was partly responsible for the one and only red flag of the session.

That came when Job van Uitert tangled with the Iron Lynx Ferrari 488 GTE of Katherine Legge at Blanchimont with an hour and 15 minutes to go, an incident that left both cars with heavy damage. Both drivers were reported to be uninjured.

The remaining Hypercar, the grandfathered Alpine A480 LMP1 car, was 11th-fastest overall with Nicolas Lapierre setting a best time of 2m05.772s - slower than the team managed on Monday.

JOTA's second car returned to action for the final half an hour of the session following Sean Gelael's heavy crash on Monday, albeit ending up 13th among the LMP2s and 16th overall.

In GTE Pro, Porsche locked out the top two places as Kevin Estre left it late to set the fastest time in class of 2m12.916s - a massive 1.3s faster than the competition - in the #92 car.

Richard Lietz set the best time in the sister #91 911 RSR-19, a 2m14.214s, to go exactly three tenths faster than James Calado in the best of the AF Corse-run factory Ferraris.

The solo Corvette C8.R was fourth-fastest with Oliver Gavin setting a 2m14.703s.

Porsches likewise led the way in GTE Am as Matteo Cairoli set the pace in the #56 Project 1 machine with a 2m14.736s to go a little over a tenth clear of Matt Campbell's Dempsey-Proton car.

Both TF Sport-run Aston Martin Vantages were back in action following their Monday crashes, with the #33 machine going third-quickest, but the same couldn't be said for the #46 Project 1 Porsche, which sat out the session.