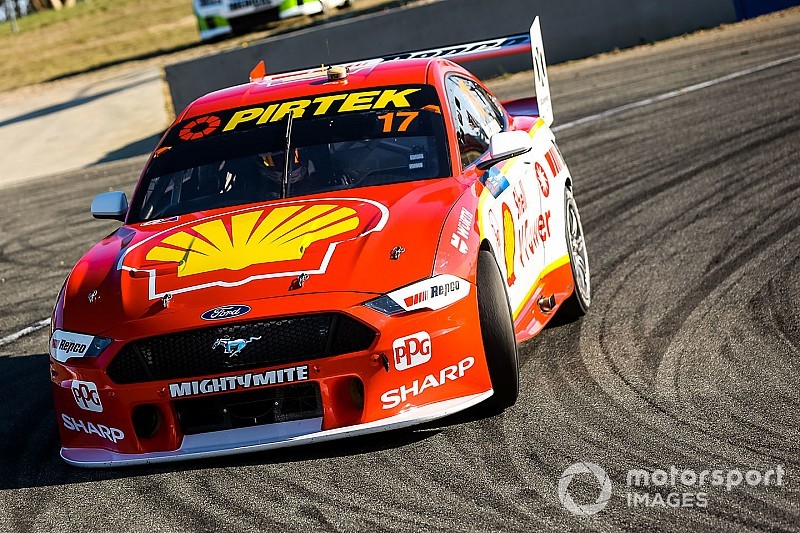 Scott McLaughlin has given the new parc ferme rules trialed at the Tasmanian Supercars round the thumbs up, but warned against expanding on it to include qualifying with race fuel loads.

Supercars trialed new parc ferme rules between qualifying and the races at Symmons Plains last weekend, which prohibited set-up changes to cars and forced teams to think beyond a one-lap dash for grid position.

The rules were generally well-received up and down pitlane, leading to questions as to whether a more extreme version of a parc ferme system should now be trailed, including a ban on refuelling once qualifying has started.

Reigning Supercars champion and Race 1 winner McLaughlin was one of those in favour of the version of the rules used for Symmons Plains. However he also said he wouldn't like to see fuel added to the mix, as it would put spectacles such as his record-breaking Shootout lap at Bathurst in 2017 at risk of disappearing from the sport.

"I really like [the rules that were trialed]. I enjoy qualifying on like a race-type set-up," he said.

When asked about fuel loads he added: "No. I think if you did fuel and stuff you would take away from what's qualifying, and that's going the fastest you can.

"I think you can still go pretty fast without your cambers and all that sort of stuff, but you'll never see lap records again. Maybe stuff like the Bathurst lap a few years ago, you'd never see that again.

"I'd be pretty disappointed if we went that way. Records are meant to be broken. I think everyone will understand. I think if you did the fuel it complicates for fans. I don't know. We stop and we put fuel in, what's the point of mandating it in some way?"

"If they're going to continue with it, I'm a fan of pushing it a little bit harder," he said.

"That would mix things up a little bit more."

Dutton added that he would like to see the time gaps between qualifying and the races shrink, making for a more compact day at the track for both crews and fans.

"This is the one I'm most excited about – close up from qualifying to the race. It's a legitimate thing," he said.

"Your Saturday race is always later than your Sunday race. The last thing we want for the crew is for the girls and guys to do a big day Saturday, and even without any crash damage have to get up early and do another big day. It's not the best way to operate.

"If you can tighten up those times between qualifying to parc ferme, you can shorten up the whole day – which I think gives the fans a better product. You'll watch qualifying, go and grab a burger and buy some merch, and then come back and watch the race."

The parc ferme rules will be used again at the Queensland Raceway round in July.

Supercars to hold 'Game of Thrones Round'